Tuesday may not be a regular blog post day, but today is CFS / M.E. Awareness Day and my good friend David Tubb has asked me to write an entry about it. The piece he himself wrote on this day last year is doubtlessly the definitive piece of writing on the subject and I certainly don’t think I’m likely to write anything as good as that, but the important thing is raising awareness. For those who don’t know what CFS or M.E. is, let me explain it to you: M.E. stands for myalgic encephalomyelitis which, in layman’s terms is chronic fatigue syndrome (CFS) and chronic fatigue syndrome is a very debilitating illness. Let me tell you a story about it.

Back in 2012, I was visiting David in Bath on a nice summer’s day. We met up quite a large number of times during the summer of that year and always did very nice things like having pizzas, or buying finger puppets, or looking around in bookshops and so on. Generally it was just the kind of stuff that he and I both enjoy a lot. I remember distinctly thinking on one of the days that it was very nice to be able to do things like that with somebody and that, as we both lived in close proximity to one another and both liked each other very much (and still do) there was no reason that we’d ever stop being able to these nice days. As of today, it’s been well over a year since we’ve been able to do anything like that and I only really get to see David for brief meet ups once every month or two.

The thing is, even back in 2012 David was suffering from the early stages of CFS / M.E. and since then it worsened to the extent that he doesn’t get to do very much any more. This is an illness which saps you of your energy, causes terrible migraines, aches all over, nausea and prevents sleep from properly refreshing you. As somebody who doesn’t personally suffer from that illness, I am probably making it sound less bad than it is. I also hate to take something that I am lucky enough not to have and make it about me: yes, it may be sad for me not being able to see David, but it is much worse for him having to actually suffer through all of that and not get to see anybody. But, thankfully, he takes small steps towards recovery and hopefully it won’t be too long before he (and, indeed, everybody else who suffers from this illness) is able to do the things he wants to do again. 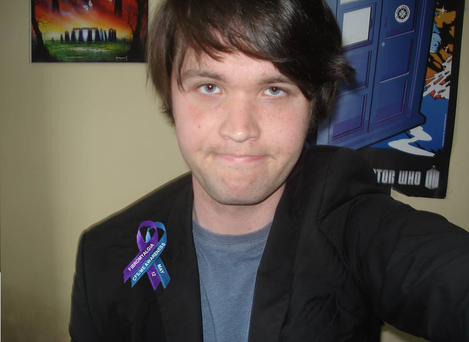 (Sadly, I don’t have one of the actual ribbons for the day, but one of my friends very kindly photoshopped one on me!)

This entry was posted in Best Entries, Thoughts. Bookmark the permalink.