A Clockwork Orange by Anthony Burgess 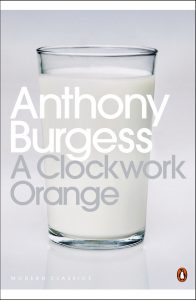 A Clockwork Orange is a novel set in a dystopian future where we learn about the adventures about a young trouble maker named Alex. Now, I called him a ‘trouble maker’ but really Alex is much worse than any regular old fooligan… But you may not notice it. The novel is very experimental, and in a rather admirable way, in that Burgess has created a whole slang language which, I assume, is supposed to be the way all teenagers talk in the future (Nadsat, the language is called). Now, before I continue with the review, I’m going to give you a very big warning about the explicit nature of this book: basically, Alex rapes and brutally attacks/murders people. Luckily, the Nadsat language is a kind of censor for all this ultra-violence because, when it’s happening, you’re still learning what the Nadsat words mean and so you won’t be entirely sure what is happening. But what’s really clever about Nadsat is that, as you read more and more, you slowly learn the language and by the end, you’ll have horrible realisations about what Alex was actually doing near the start… Well, you might anyway, I never noticed until other people mentioned it to me.

Another interesting point about this book is that, while Alex is introduced as a very detestable character, I have to insist that you don’t give up on the book at the start. You probably will get annoyed/bored with reading all about the bad crimes that Alex commits, but about half way through Alex is captured and gradually becomes more and more likeable, and then an interesting philosophical question is asked: Is it better to choose to be bad than to be forced to be good? I shan’t tell you how it’s answered!

Despite dealing with rather uncomfortable subjects, I still liked this book, so I rate it as a 7.4/10.