A Dark Hand by Oscar TK 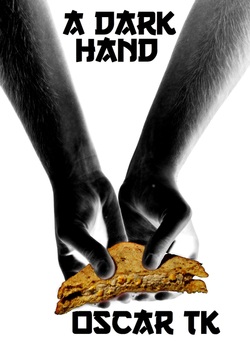 This is the debut novella of Oscar Taylor-Kent and is a parody of the supernatural romance genre and Stephenie Meyer’s Twilight in particular. Having said that, while it is a parody of Twilight, you can still enjoy this story without knowing anything about it (like I did).

The story is about a teenage girl named Frederica Williams who has moved to a new town to live with her Uncle Toby after some kind of fishing accident. At this new school she meets an unusual boy named Alex, who she instantly becomes hugely attracted to. She also meets another boy, Darren, who is the opposite of Alex in every way, except, it seems, in terms of attractiveness, as she falls for him too. So, Frederica struggles to choose between each of these handsome young men and, at the same time, gets caught up with vampires, werewolves, banshees and sorceresses.

Now, that storyline may not sound very funny but it is. As the blurb itself says, this is “hilariously dry” a description that fits it very well. It reads almost as if somebody who really hated supernatural romances had found themselves having to write one and so had tried to make fun of the genre in as subtle a way as possible. There are lots of lines that you’ll read and then laugh after a second’s thought. Much of the humour in the book does not draw attention to itself, and very charmingly so, too. Another thing I noticed was the tendency for things to be very unnecessarily over explained; this may sound like a criticism, but it actually is the cause of several laugh out loud moments.

However, despite it being so highly enjoyable, A Dark Hand does have its faults. It was self-published and so did not have an editor, which is noticeable due to a few mistakes. Of course, I’m not saying that this is riddled with errors; there was just the occasional clunky sounding sentence or typo which broke the flow.

On the whole, this is a highly entertaining book and one I would heavily recommend. The author of it describes it as a parody but, at the risk of sounding snobbish, I would say that its comedy is so sophisticated that it belongs a level up in the realms of satire. Rating: 8.4/10