An Ecobardic Manifesto by Fire Springs 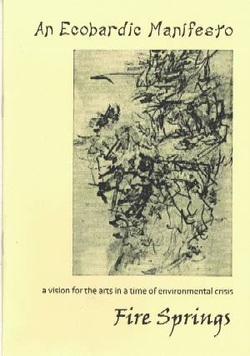 An Ecobardic Manifesto is a pamphlet written by Fire Springs (Anthony Nanson, Kevin Manwaring, Kirsty Hartsiotis, David Metcalfe and Richard Selby) in which they lay out the role that they think storytelling should play in the modern world. It’s very short and can easily be read in a single sitting. One small point about the title, which I quite liked, was that it is that it is AN Ecobardic Manifesto, rather than THE Ecobardic Manifesto, because they realise that thoughts and ideas change and that the things in the pamphlet may not always be the right things to do.

Basically, the pamphlet puts forward the idea that fiction should encourage its readers to respect nature and to respect the traditions of the past. It also encourages writers to respect their audience and argues against the idea of ‘dumbing down’ work in order to appeal to the most people as they believe that a piece of work should teach its audience. The pamphlet is also quite critical of modern culture and society as a whole, and points out a few ways in which it is damaging to people.

While there are some very good points and arguments, it does seem to be slightly overly wordy. Sometimes things are written with many overly long words and sentences, perhaps with the intent of teaching the audience, but it often just comes across as boring. The points would be made with a much bigger impact if they were written in a more straightforward manner. There is also a section where conflicting religious beliefs are discussed, and it says something along the lines of “these days non-religious people can be as bad as the extreme religious groups” which is a bit silly, since I don’t believe there are any cases of terrorist atheist groups.

On the whole, this is a nice little pamphlet with a generally good message to it, even if it is a bit bothersome with its deliverance. 6.5/10.