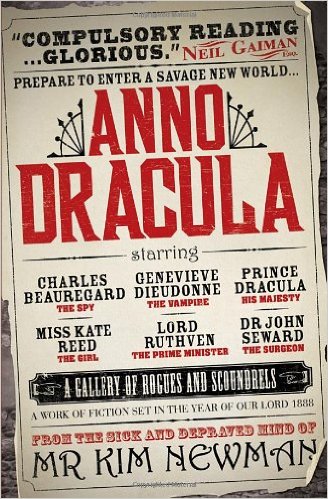 Anno Dracula is a very interesting alternative history novel about what would have happened if Dracula had been successful with his plans, in the original novel. As I am very interested in the original, this was naturally a novel I was very keen to read!

One of the things I like the most about the world of Anno Dracula is that it is very three dimensional. Dracula is now the prince consort and vampirism has become a common thing in Britain. Some people angrily rebel against it and others happily accept it. Some vampires are evil, murdering monsters and some vampires are just regular people trying to live their lives. Some of the people who appose vampirism, therefore, are harassing vampires who are doing nothing wrong. Geneviève Dieudonn is, probably the most interesting vampire character in the book and is pretty much the main character too – she’s very endearing, yet mysterious and intriguing too.

Speaking of characters, the London of Anno Dracula is populated by characters who have appeared in different pieces of 19th century literature. Mycroft Holmes, Dr. Jekyll, Dr. Moreau and various other characters all make appearances (some small, some not so small.) It’s not just literary characters either, I was delighted that Nosferatu‘s Count Orlok made an appearance and even more delighted that Blacula‘s Prince Mamuwalde was mentioned by name. Fans of horror (and especially vampire fiction) will enjoy spotting the references.

It’s quite a shocking story, really, in that there is a lot of extreme violence in it. This is quite unpleasant, but the fact that it is contrasted against genuine, human emotion helps to make both of these things more impactful. It’s definitely essential for what Kim Newman was going for, just be warned that it is not for the feint of heart!

The main story follows an investigation into the Jack the Ripper murders (which, of course, are different in this timeline) so if they’re something which interests you, this might make the book more appealing. Generally, I felt a bit like the main narrative was fairly weak and that each chapter was more just a glimpse into this different world, but since those glimpses were so interesting, it was never too much of a problem for me.

This is definitely something for fans, but even if you don’t know much about works from that period or in that genre, that world that Newman creates is interesting enough that you will probably still enjoy it. A recommended read.