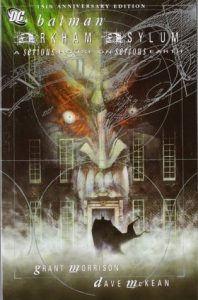 Imagine you’ve been reading a few Batman comics late into the night and then when you go to sleep, you have a nightmare. Since the last thing you read was a Batman story, elements of the comics start bleeding into your dream. When you wake up with your heart pounding, you find that, somehow or another, your dream has all been recorded in graphic novel form – that graphic novel you find upon your awakening is Arkham Asylum.

The story goes that The Joker and the other inmates have taken over Arkham Asylum and have taken the staff hostage. They demand that Batman come and see them, so, of course, he does.

What ensues, is chaos. It’s not so much a story, as an exploration of the psyche of Batman, The Joker, Two Face and several other characters. We also get glimpses of the life of Amadeus Arkham, the founder of the asylum. A lot of it is very grim, to a much greater degree than anything I’ve seen from a Batman comic in the past. It’s rather disturbing.

What really helps to reinforce the dream-like feeling that this graphic novel evokes is the artwork by David McKean. It’s really hard to describe something so visual in words, but it looks very good indeed. It’s often very creepy and it creates a perfect atmosphere for the mental institution. One moment things look very, very realistic and they next they look surreal and bizarre – the contrast is very effective. I do have one small criticism though and that’s that there’s often red text against black (or otherwise very dark) backdrops and I found it quite difficult to read, especially as it was an unusual font.

This is one of my favourite Batman graphic novels and one which I think most people would enjoy. Not only do I really enjoy Batman’s characterisation in it, but it’s also the most frightening interpretation of The Joker that I’ve seen. Plus, the art is so good, that it’s just nice to look at, without the context of the story. I strongly recommend it.