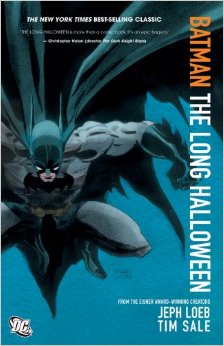 Batman: The Long Halloween is a graphic novel set during the early days of Batman’s crime fighting career. It’s the kind of thing that you could read with only a rough understanding of the Batman mythos and is also a very enjoyable story.

This is essentially a murder mystery: every holiday, somebody is murdered and it’s always somebody who is some how connected with one of two feuding Gotham crime families. In the middle of these murders are villains like The Joker, The Riddler, Poison Ivy and The Scarecrow, all of whom cause even more trouble for Batman and the police force as they try to get to the bottom of those murders.

The story was deeply interesting and there were several very sad (and unexpected) twists and turns as it went along. The tone of the story, coupled with Tim Sale’s art, made the whole thing hard to put down. Everything was quite dark and moody, but at the same time there were brightly coloured superheroes thrown into the mix. One thing I really love, is the feeling of being in a city during the night and that feeling was captured perfectly in this graphic novel. All the characters felt very human too and there was a lot of emotion in this book.

As I said, this is a good graphic novel to read even if you’ve only got a general understanding of the story of Batman; other than a few recurring characters, it’s all very self-contained. The characters in it, in fact, might be just the thing to help inspire you to read further stories of Batman. It’s a beautifully realised world and I find it all deeply immersive. This is definitely something which I would strongly recommend; if you want to know more about Batman, this could be a good jumping in point.