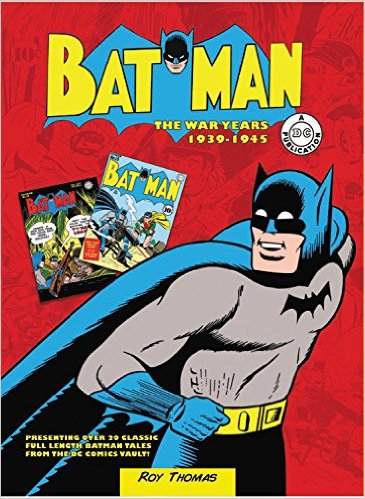 Not everybody will know this, but Batman has actually been around for a very long time indeed. The first Batman adventure was in 1939, which of course was also the year that the Second World War started out. Not that America was involved in it at that point. Batman: The War Years is a collection of Batman strips printed at the time and they show how Batman’s life was affected by the war and what he did in order to aid the home front.

The collection includes quite a large number of strips – some have Batman directly fighting against the Nazis, while others tend to focus on his struggles with spies and people who are disrupting war efforts for their own personal gains. What I quite like is that Batman is always spreading a message of cooperation and acceptance of other peoples – this was, of course, to contrast his worldview against the Nazis, but it’s refreshing to read in 2017 when prejudice and discrimination seem be on the rise as people forget the lessons from history.

The collection includes the very first Batman strip, which is quite an interesting thing to read. I was disappointed, however, that the very first appearance of Robin was not included. Some of these really fantastic, whereas others were just lighthearted “Batman fights wacky criminals” affairs. There were a very large number of strips in this collection, so I won’t go over all of them, but I shall mention a few of my favourites.

“The Strange Case of Professor Radium” doesn’t really tie much into the war (other than with the subject of nuclear experimentation) but it features a villain I found really interesting and particularly tragic. “The Two Futures” has Batman and Robin meeting with scholars who paint them two pictures of the future, one a very grim one where the Nazis have conquered America and Batman and Robin continue to try and fight them. This one is surprisingly dark considering the tone of the rest of them. “Atlantis Goes to War” is a really bizarre story about the Nazis teaming up with a forgotten race of people living at the bottom of the ocean in Atlantis (which Batman and Robin get caught up in) – I liked it for how strange it was. “The Year 3,000” is another weird one which shows what life is like in the year 3,000 where the legacies of Batman and Robin (and the Second World War) are not forgotten. Finally “Batman Goes to Washington” sees Batman trying to make it illegal for employers to discriminate against ex-convicts when hiring people after he realises that this is an issue. I love it in its simplicity.

As well as the comic strips themselves, there is also a selection of essays written by Roy Thomas, the man who chose the comics for inclusion. These offer an interesting historical context to the strips and help to make sense of any things which modern readers might not understand. You don’t really need to read them to enjoy the comics, but I recommend doing so because they’re not too long and are quite informative. There are also lots of comic covers which don’t tie into any stories, but which show Batman and Robin assisting troops and taking part in other patriotic activities. I found them amusing.

Overall, it’s a very interesting collection and anybody who is a fan of Batman is sure to appreciate this collection. The 1940s incarnation of Batman has a rather upbeat charm to him and its interesting to contrast this against the more brooding behaviour of modern day Batman. Some of the strips may lack the depth that you’d find in more recent comics, but I still think that it’s worth reading them and I had a nice time doing so.