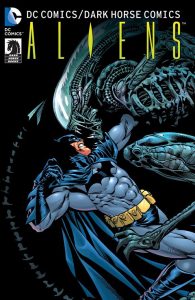 I’m quite a fan of the DC Universe (especially Batman) and I am also quite a fan of the Alien franchise. These are two things that are quite different and I enjoy them in different ways, so I was quite surprised (and excited) to discover that there were a selection of stories which mixed elements of the two together. The DC Comics/Dark Horse Comics: Aliens collection brings together several stories which have DC characters encountering Xenomorphs and it’s a collection I quite enjoyed. Here are mini reviews of each story in this collection.

Batman/Aliens by Ron Marz
On a “mission of mercy” Batman finds himself in a jungle on the Mexican-Guatemalan border. He soon encounters a group of military people who are also there on some kind of top secret work. You soon find that they’re there to investigate a crashed space craft which landed in that jungle – its crew made up of aliens, aliens who have been killed by Xenomorphs. Obviously, I don’t want to spoil anything, but I really quite liked this story. Nice art (by Bernie Wrightson), good atmosphere, Batman is well characterised, there are good side characters and I think the Xenomorphs are used in a good, creepy way. It’s probably the best story in the collection. Rating: 8.5/10

Batman/Aliens II by Ian Edington
Last time Batman faced Xenomorphs, it was in a jungle, far from his home. But this time the Xenomorphs have come to Gotham. As it turns out, an explorer had inadvertently brought them back to the city decades ago and then locked them in a vault to stop them from harming anyone. Naturally, they later get out and it’s up to Batman to sort things out. This story is a bit longer than the previous one, and I have to say I didn’t enjoy it quite as much. It read like more of a comic romp than the previous one, which managed to capture the horror element from the Alien films much better. Towards the end, it got downright weird too – in an entertaining way, but still quite weird nonetheless, which might put some people off. Rating: 8/10

Superman and Batman Vs. Aliens and Predator by Mark Schultz
Unlike the previous two stories, this one is more focused around Superman. Batman still plays an important role, but it definitely feels like Superman is the main character. I’m fine with this, since I quite like Superman and I feel like he comes off especially well in this one. The story goes that a group of researchers up in The Andes have been killed mysteriously. As it turns out, there’s a secret civilisation of Aliens and Predators living there. I was a bit disappointed, in that Superman and Batman both make reference to encounters with Predators which aren’t shown in this collection and Superman knows the Xenomorphs too, which also isn’t shown, so I felt like I was missing a part of the story. But overall, I really quite liked this one, particularly some of the moral dilemmas faced by Superman and Batman. The art by Ariel Olivetti is the best in the collection too. Rating: 8.3/10

WILDC.A.T.S/Aliens by Warren Ellis
I think, perhaps, that I didn’t have enough foreknowledge to enjoy this story. This was actually the very first WILDC.A.T.S story that I read. As it was, it felt like a very generic story featuring Xenomorphs. I didn’t really feel that it was particularly atmospheric, that it had much emotional depth or that it raised any interesting questions. Perhaps it feels much more significant if you know the histories of its characters (and there are a fair few references which seemed to allude to earlier stories) but without that understanding of the franchise, it reads like a story where undeveloped characters face off against poorly utilised Xenomorphs. Rating: 4.9/10