Doctor Who: Festival of Death by Jonathan Morris 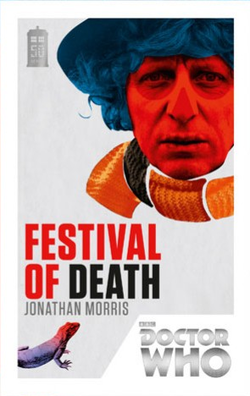 Festival of Death is part of the BBC’s Past Doctor Adventures range and is a brand new adventure for the Fourth Doctor, Romana and K9, which just so happens to be one of my absolute favourite TARDIS teams. This novel is excellent, and if you need more than just my word, this was the single Fourth Doctor novel which was reprinted for the fiftieth anniversary of Doctor Who!

The story is quite clever and uses time travel as a central point; the Doctor and his companions arrive on a space station where some kind of disaster is clearly unfolding. As they get on with saving the day, as they always do, they find out that many of the people recognise them there; it is soon revealed that they had arrived there earlier in time and already wrapped up the biggest part of the problem, which seems like a nice curiosity to them, until they found out that the Doctor sacrificed his life to save everybody…

What’s good about this novel is the fact that it has the perfect mixture of comedy and sadness. At times I found it very funny and there’s a lot of jokes which are subtle jabs at certain tropes found commonly in Doctor Who and they fit in very well (indeed, I can imagine them being in actual television stories from that time.) But things do get very dark; this contrast of humour against sadness strengthens the impact of both.

There is also a good set of characters; of course, the Doctor, Romana and K9 are all very good (and the Doctor, especially, comes off well in this one) but the characters made especially for this story are also very memorable; my favourite is a computer system named ERIC. ERIC is a very likeable computer system and I couldn’t help but feel very sorry for him. In fact, the ERIC’s story is probably the darkest and saddest thing about the book.

So, if you’re a Doctor Who fan and you think a clever, emotional, witty story is what you’d like, then this is definitely worth your time!