Doctor Who: Magic of the Angels by Jacqueline Rayner 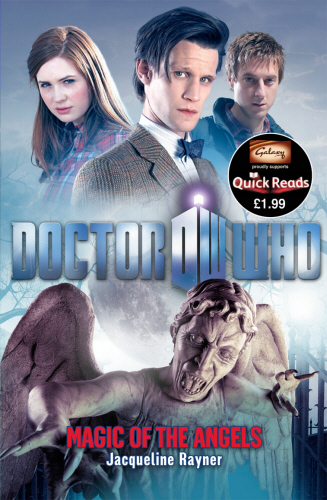 This Doctor Who novella is part of the Quick Reads range which means that, depending on how fast you read, you should be able to finish this within one to three hours. The idea is, that people who aren’t really into reading will read these books and take their first baby steps into Book Land.

This particular book features the Eleventh Doctor, Amy and Rory as it’s protagonists who, at the start of the story, are being tourists in London. They soon learn that a magician is using a Weeping Angel (creatures which often appear on the series) as part of his act and decide to put a stop to him. It’s all a very visual story, and anybody who has seen lots of the television episodes will have no problem visualising the everything that happens.

The story is very easy to follow and has several humorous and light-hearted moments littered throughout it. Having said that, the whole thing isn’t some jolly romp, there are some very touching and even sad moments in the novel and it has just the same perfect mix that the series does.

The main problem I have with this story is the fact that it is limited by this short format. I think it might have benefited had it been somewhat longer. The story’s main villain (not the Angel) seems a little unrealistic to me, and that’s probably because we don’t get enough time to learn about him.

On the other hand, one thing I especially like about this story was the fact that there were lots of references to Doctor Who‘s past, none of which seemed especially forced. As they take a tour around London, the Doctor recounts all of the different adventures he has had around the city. The Doctor also spends a significant amount of time dressed as his third incarnation and Amy spends a lot of time dressed as Zoe Heriot (one of my favourite companions!) I shan’t spoil why though.

On the whole, while it is a good story with lots of good bits, some characters feel a little under developed due to its length. I’d rate it as 7.3/10.