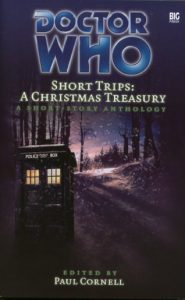 Today, for the first non-Christmas entry I’ve decided to write another book review. Although, a little bit ironically, the book is a Christmas short story anthology which I’ve read over the last month, making this entry slightly Christmassy too. This book, Doctor Who Short Trips: A Christmas Treasury, has quite a nice mixture of stories, ranging from very serious ones to very silly ones, all of them, of course, using characters from Doctor Who (which just happens to be one of my favourite TV series!) I’ll write a brief little something about every story in this collection now:

Last Christmas by Simon Guerrier: 8/10
The Seventh Doctor visits an old friend of his every Christmas… It’s quite a gloomy story really, but still, quite an interesting one. A nice start to the anthology.

UNIT Christmas Parties: First Christmas by Nick Wallace:  8.2/10
The next story is a slightly better one. This one is definitely more Christmassy feeling than the first one too. In this one the Third Doctor spends his first Christmas day on Earth after being trapped there and, well, I think it’s quite nice, especially the ending.

In the TARDIS: Christmas Day by Val Douglas: 8.1/10
This is a fun little poem about how Christmas day is spent on the TARDIS with the Fifth Doctor and his companions. It’s quite amusing really, and a parody of the famous ‘In the Workhouse: Christmas Day’ poem.

Water’s Edge by Peter Adamson: 6.4/10
The Sixth Doctor is involved with the real life Tangiwai train crash of Christmas 1953. It’s not really Christmassy at all, and very grim really. It’s not bad, but it’s not overly fun either.

A Yuletide Tale: Part One by Dave Stone: 6/10
A story about a cat named Tom who appears to be trying to survive in Victorian London during an alien invasion. It’s not bad, but a little boring. The TARDIS appears at the very end and this story is continued in part two.

Spookasm by Peter Anghelides: 4/10
This is the only story in the whole anthology that I would call bad. The story is about a little girl visiting a theme park and The Seventh Doctor makes a few small appearances. Some alien or something is planning on using the girl or something and… Well, it just isn’t very good, and it doesn’t really need to be in a Christmas anthology either, the only link to the festive season is that the girl’s birthday is the 25th of December.

Christmas Special by Marc Platt: 8/10
This is a rather meta and bizarre story featuring the Sixth Doctor entering the world of television and learning that his show might be cancelled. There are lots of references to the real life factors in Doctor Who‘s cancellation, which are fun to spot if you know them, and the strangeness of the story makes it rather fun to read.

Never Seen Cairo by Darren Sellers: 8.5/10
This is another rather sad story: The Fifth Doctor visits the football playing truce of World War 1 and makes a new friend. This is a very good story though, and one of the best ‘serious’ stories in this anthology.

The Man Who (Nearly) Killed Christmas by Mark Michalowski: 9.2/10
This story was my favourite one in the anthology! Favourite story that is, there’s a poem later on that’s better than it. The Second Doctor has a little adventure with Santa Claus and, well, it’s just a wonderfully written piece of festive fun!

Last Minute Shopping by Neil Perryman: 8.9/10
This one is another jolly yuletide story. The Fifth Doctor and his companions decide to do some Christmas shopping on Christmas Eve, with some rather humorous results. The funniest parts of this story are the bits that show Turlough and the Doctor failing to fit into normal society due to their being so otherworldly.

Every Day by Stephen Fewell: 8.5/10
The First Doctor and his companions land in a house where it really is Christmas every day… It’s quite an interesting story really, and all the characters are presented perfectly. Plus, it gets a good mixture of comedy and drama.

The Eight Doctors of Christmas by Matthew Griffiths: 8/10
A parody of the poem The Twelve Days of Christmas (in case it wasn’t obvious from the title). It’s quite fun to read, though a couple of the lines seem to me as if they don’t quite fit.

The Little Things by Paul Beardsley: 8/10
Back when the TARDIS could transform to fit into its surroundings, a woman accidentally posted a Christmas card into it because it looked like a post box. Years later the Fourth Doctor and Romana find this letter and decide to deliver it. This story is quite funny, a jolly Christmas romp. Plus, this story is the first of several crazy Fourth Doctor and Romana adventures, so you have more of these to look forward to afterwards.

Beep the Meep’s Grundian Egg Nog, The Brig’s Brandy Butter, The Game of Rassilon, Animus, Zarbi and Menoptra, Camilla’s O-Negative Mulled Wine and Mrs Baddeley’s Mini Christmas Pudding Truffles 7/10
These are all separate things in the book, and none of them are stories. Each of them is a Doctor Who related recipe or game. Animus, Zarbi and Menoptra seems to be the most fun of all of them.

UNIT Christmas Parties: Christmas Truce by Terrance Dicks: 9/10
Another story set while the Third Doctor was trapped on Earth, this story also has The Master in it! I won’t spoil what happens, but it’s a very good, very sweet story! One of the best in the book.

The Clanging Chimes of Doom by Jonathan Morris: 8/10
This one seems to me like it’s a sequel to The Little Things. Another funny story about the Fourth Doctor and Romana. The Doctor decides to start collecting autographs, and so he visits the recording of ‘Do They Know It’s Christmas?’ it’s not a particularly Christmassy story, but a good one nonetheless.

On Being Five by Jo Fletcher: 7/10
A nice little nostalgic poem about the writer’s experience of watching Doctor Who as a young child. Not too bad.

Perfect Present by Andy Campbell: 8.5/10
Somewhat creepy story about the Seventh Doctor ridding an old house of ghosts in the early 1900s. The story has a rather nice twist to it as well… Plus, it’s a race against time too; he needs to get it all done before the next day: Christmas!

Present Tense by Ian Potter 9/10
This is the best Fourth Doctor and Romana story. The two of them exchange gifts on Christmas day, unfortunately, The Doctor’s outlandish gift causes some kind of damage by being pulled out of time. This one’s funny and nice at the same time.

Goodwill Toward Men by J. Shaun Lyon: 8.5/10
Another great story about the Second Doctor. He has his companions Jamie and Zoe with him this time too. It isn’t quite as good as the earlier Second Doctor story, but it’s still very enjoyable. Here he visits a homeless shelter on Christmas Eve to do some charitable work, and one of his companions learns a valuable lesson!

It’s a Lovely Day Tomorrow by Martin Day:  8/10
The Fourth Doctor and Leela inadvertently interfere with The Homeguard’s training during Christmas time. Quite an enjoyable read, and a more serious story for the Fourth Doctor after the other three more jokey ones.

All Our Christmases by Steve Lyons: 9/10
This is a very good story dealing with how people would use time travel if they had access to it. The Doctor plays a fairly small part in this story, and I’m not entirely sure which one it’s supposed to be, but I think it’s The First Doctor. This story is also extremely meta as well, as a large part of the story has a character describing Doctor Who to The Doctor!

Lily by Jackie Marshall: 7.9/10
The Fifth Doctor visits Sarah Jane Smith, at a much later point in her life, around Christmas time. While there, he meets her granddaughter Lily. Nothing much really happens, but I like it for being very relatably Christmassy. Plus, I do quite like the character Lily, I wonder if she’s in anything else?

A Yuletide Tale: Part 2 by Dave Stone: 7/10
The conclusion to A Yuletide Tale. It’s better than the first part, and has the Seventh Doctor and Ace in it. Fairly funny too.

…Be Forgot by Cavan Scott and Mark Wright: 8.9/10
The Eighth Doctor visits Bernice Summerfield at Christmas time. Now, I don’t know very much about Bernice Summerfield, but this story makes me want to read some of the spin-off books about her; it’s a very good story.

The Feast of Seven, Eight (and Nine) by Vanessa Bishop: 10/10
A hilarious poem about all of the Doctors having a Christmas party together. I was laughing all the way through! It’s the best thing in the book, in my opinion, which is why I have given it a 10/10, but anybody unfamiliar with Doctor Who would get no joy from this poem at all.

UNIT Christmas Parties: Ships That Pass by Karen Dunn: 9/10
Another more serious Fourth Doctor story, and it’s mainly about his companions Sarah and Harry. The two of them are in an explosion and think they’re likely to die and, well, the little conversations they have to comfort each other are very well written. Overall a very good story.

Evergreen by Stephen Cole 5/10
I didn’t get this story. I gave it a 5/10 because I don’t know what was going on in it. There are so many Doctor Who books and characters and everything, it’s probably dealing with a section of the Whoniverse I’m unfamiliar with… So it must be very obscure. Not all that entertaining either.

Average: 7.3/10
The average score of this book seems quite low to me though, as I enjoyed it more than that! My only problem with the book is that each of the Doctors didn’t seem to be equally used… But it was a fun and enjoyable read nonetheless, especially around the Christmas season.

Oh my goodness, this might be my longest entry! Short story anthologies take a while to review I guess.

This entry was posted in Book Reviews, Christmas. Bookmark the permalink.