Doctor Who: The Silurian Gift by Mike Tucker 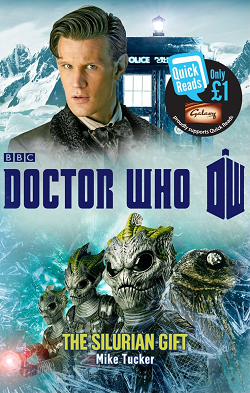 The Silurian Gift sees a companion-less Eleventh Doctor travelling to a research centre in the South Pole where a man claims that he can solve all of the world’s energy problems with his mysterious new power source. As I’m sure you can guess, foul-play is afoot and it involves the Silurians…

This book is a part of the Quick Reads scheme, which means that it’s very short and designed with the intent of encouraging people who don’t read very much to start reading more often. While this is a very nice idea, it does mean that the storyline seems to be a little under developed. It’s a nice enough, but just as I found myself getting into it, it was over.

One particular oddity about this book is the fact that throughout the story the Doctor is accompanied by a woman named Lizzie Davies and she is essentially just a companion stand-in. She feels like a watered down version of Amy Pond and so I have to wonder, why isn’t Amy with the Doctor in this story? I wonder if, perhaps, it was originally written with her present, only for them to find out that it would be released after she’d gone? But just because Karen Gillan left the show, why does that mean that a book requiring no input from actors can’t have Amy?

I think one of the best things about The Silurian Gift is its Silurian characters. I have to admit, I’m not a fan of the design for the Silurians since 2010, but when they’re used in this prose format it doesn’t bother me because I can’t see them. But aside from the fact that I can’t see them (which is a really weird positive) I felt that most of the interesting characters where Silurians. Some are good and some are bad, just like the humans and while the storyline’s not fantastic, and nothing new is really done with the Silurians, it never feels like retreading old ground.

On the whole, this book’s not fantastic, but it is good and it’s also short and cheap, so you may as well give it a try. Rating: 7/10