Dracula the Un-Dead by Dacre Stoker and Ian Holt 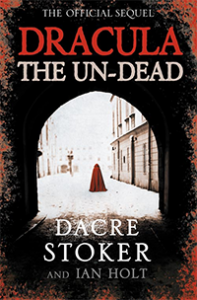 This book is the official sequel to the famous book Dracula by Bram Stoker and I know that reviews of this book have been rather mixed, but still I like this book quite a lot!

This book, while an official sequel was written a hundred and twelve years after the original and, as such, there are some noticeable differences. Firstly, the epistolary style has been abandoned and a lot of it is told by an omniscient third person narrator (though occasionally letters or other things are used), and while this may slightly reduce to realism of it, it doesn’t make it any worse than the original at all. Secondly, the English language has changed considerably during those hundred and twelve years and so the highly formal (and somewhat archaic) writing style has gone in this sequel. The change of writing style, in my opinion, is something which this book does not suffer from.

This book fits its horror genre very well and it captures the feeling of cold winters nights very well which match perfectly with the dark tone of the book. Some parts are very creepy indeed. It takes a lot of liberties with the original book, but I don’t see anything wrong with that, it’s an original piece of fiction after all and shouldn’t be confined by another one (it does even give explanation for inconsistencies with the original, but I won’t spoil it).

On the downside, however, while the original made very, very subtle sexual suggestions about the character of Dracula due to the attitudes at the time (I’m not entirely sure they’re even there, but Wikipedia tells me otherwise, as does my edition’s introduction) this book is very overtly sexual at times, something others may see as a plus… but I see as a minus. Plus, the authors choose a very bad time to make a Star Wars reference… But, again, I won’t spoil it.

To conclude, this is a chilling and satisfactory sequel to Dracula, earning a 9/10 (just like the original!)