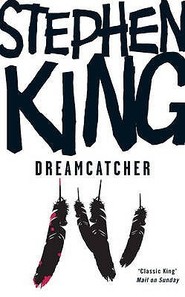 In 1999 Stephen King was in a horrible accident which left him with a long and difficult recuperation period. Dreamcatcher is the first novel he wrote after this accident and while it may be a story about aliens and psychic abilities, it is very much linked to his accident as well. Keeping this in mind as you read gives the book an interesting, if sad, extra layer.

The main story follows a group of four long-time friends (Jonsey, Henry, Pete and Beaver) as they take a trip to ‘The Hole in the Wall’ which is an old cabin where they’d stayed several times throughout their lives. These aren’t just any four people though, it just so happens that each one of them is at least a little bit psychic. That’s not all, either. The trip doesn’t go quite as planned when a nice man named McCarthy arrives at their cabin and explains that he’s been lost in the woods for ages. He’s clearly also quite ill. From then on everything seems to just get worse and worse for our protagonists.

At the start of the story, there’s a really strong feeling of uneasiness and mystery. You know something bad is going to happen, you just don’t know what. You’ll find yourself getting increasingly paranoid about things and worrying very much for all of the characters. Sadly, once the main ‘threat’ of the novel is revealed, and this happens fairly early on, everything becomes just a little bit less interesting.

Furthermore, perhaps in attempt to make things more frightening or atmospheric, this novel can be a little disgusting. There are several very gory moments and things like that, which I didn’t think were really needed. A lot of it seemed very over the top and maybe even a little childish. I read it thinking “I’m supposed to be really grossed out now” but instead it just fell flat entirely. I also found that there was rather a few too many references to popular culture and these reduced the enjoyment for me. I can understand why an author might choose to use them for effect, but this feels like we got fifty grams when only a pinch was required. There was also a mentally disabled character, who, while generally a positive addition to the story, seemed to me to be rather patronising. There’s no big problem with it, but lots of smaller things bothered me.

But while Dreamcatcher is certainly not without its faults, I wouldn’t like to give it a completely negative assessment. The characters all seem very real and I cared very much for them. It was also very evident that nobody was safe; at any moment any character could be killed and this made for some very good drama. Though, as dark as the book may get (and it gets disturbingly grim at times) it still had a fairly upbeat ending, and I liked that too.

It’s a nice read, but it is very long, so, perhaps this is one you should skip unless you’re a King fan.