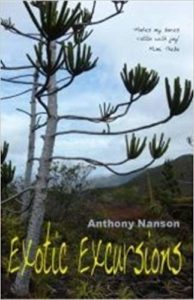 This collection of short stories opens with a very interesting essay called “The Allure of the Other” and I know that a lot of people skip over introductions in books, but in this particular case, I heavily recommend you read it. In it, the author, Anthony Nanson, talks about different groups of people who have been considered “other” and explores ways in which writing and storytelling can begin to bridge that gap. It’s a very nicely thought out piece of writing and perfectly lays down what these stories are supposed to do. It provides a context which ties them all together. It also explains that these stories narrowly tread the line between travel writing and fiction and that alone, for me, sounds very appealing. But, anyway, without further ado, here’s a review of each story in this collection.

The Things We Love
In the first story of the collection, a man named Brian who’s working in East Africa to help install a pipeline, encounters a strange pillar in a church, which he is sure is a bone… but no living species could possibly be the owner of that bone. Together with his colleague, Mary, they investigate its origins. In a way, this feels like a precursor to Nanson’s later novel, Deep Time. There’s some nice irony in the ending.

Bogoria
This is a very simple story about a man trying to navigate Lake Bogoria, a place which is very close to the equator and therefore very hot! It illustrates how much we take for granted the essential luxury of running water. It was short, but pretty tense!

A Drink Before Bedtime
A seemingly inconsequential story of an interaction between two people of very different backgrounds. It’s hard to quite identify what this story is really about – but I feel that it was written to highlight the prejudices and preconceptions that everyone is guilty of forming from time to time.

Solitude
This was an especially good one. A tourist/traveller in Greece appreciates the beauty of natural scenery and then feels a little lonely as he watches a group of friends interacting later on. It seems to compare the magnificence of the natural world, with the unquantifiable value of human bonds and interaction – I really liked that. Though this was only short, it felt very much like a real snapshot of a person’s life.

The Waves Never Ceasing
A very interesting one. It tells the story of a collapse of a civilisation and it’s done in a very timeless way. By that I mean that, after I read it, I had an internal debate – was it a story told from a future perspective about our own civilisation? Or was it somebody today telling the story of Atlantis or another lost civilisation? Well, why not read it and draw your own conclusions?

The White Hoover
This one was very different the those which came before and after it – both in terms of tone and subject matter. In it, a man heads to a castle in Scotland in order to meet a therapist who he hopes will help him to overcome some extreme allergic reactions which he has been suffering from. I guarantee you won’t guess what happens. I found it quite funny.

Rite of Passage
A story of a coming of age ceremony for some young men – with one of them having some concerns. It’s hard to say much about this story. It’s written very in the moment, which adds a great deal of tension to it all and I could actually imagine it as a performance piece actually (I’d love to see it performed one day.)

The Cobra Hissed
I remember speaking to the author and he told me that once, during his travels, he had a near encounter with a cobra and couldn’t help but think about what might have happened. This tells the story of what might have happened and it really highlights how, in certain moments, our lives could go down vastly different (and indeed, much shorter!) paths. Based on that premise, I was looking forward to this one and I enjoyed it.

The Sun Cafe
This is the second longest story in the collection and, perhaps, my favourite. It tells the story of a man in Greece who wishes to see the top of Mt. Olympus. I shan’t tell you whether or not he makes it, but on his way he interacts with a variety of different people and has a lot of interesting experiences. I feel like there’s a lesson to be learned when you get to the end, but I’m not sure that the protagonist ever learns it himself. What helped make this story so enjoyable was that the immersive writing style really made me feel like I was seeing, hearing, feeling and doing everything that the protagonist did.

The Leap of Faith
A man (Perry) is shocked when his wife (Prue) suddenly leaves their house because she is disillusioned with her life. She’s sick of the unfulfilling humdrum of day to day existence and so one night she decides to leave it all behind – much to Perry’s bemusement. This decision takes them both on quite a journey and I found myself very invested in these characters. I think what makes it so appealing is that everyone will have thought about doing what Prue does at some point and it’s nice to see that fantasy play out.

The Last Coelacanth
A very short and depressing story about the last Coelacanth in existence. Presumably set in the near future, what makes it so much worse is that it is so terribly believable. It’s hard to say as much about this one – but again it creates the impression that you’re seeing just a snapshot of the lives of real people.

The Flower People of the Pamirs
One of the best in the collection: a group of three people in Soviet Russia head out to an obscure corner of the country in order to investigate rumours of Neanderthals. The three characters are all very different people and all have very different motives for being there: the story is told by switching between each of their diary entries and it’s an approach I quite enjoyed. Together they encounter the ‘Rayu’ people, who they hope may give them some insights. I found the direction of the story most unexpected, but appreciated that clues to what was really happening were planted along the way. The ending was very sweet and nicely optimistic. A perfect way to close off the anthology.

So, if you happen to come across this book (which, unfortunately, isn’t very common!) I recommend you give it a try. Genuine thoughts, feelings, sensations and impressions have been captured in these stories – but it’s not just raw experiences, there’s some thought provoking and insightful stuff here too.