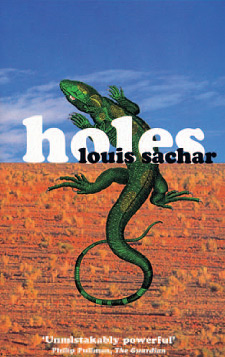 This is one of those children’s novels which I imagine will appeal to all ages, even if you’re not the kind of person who’ll usually be interested in things with a younger target audience. Holes contains a large cast of memorable characters who you’ll find yourself caring very much for. Something I’ve heard people complain about, is the way that everything seems to fit together perfectly (I shan’t go into details in case I spoil it), but this was one feature that I was actually especially fond of, as it gives you such a lovely feeling of closure as you get to the end.

Anyway, on to the specifics; Holes follows the story of a boy named Stanley Yelnats who, after being arrested for theft, has to serve a sentence at Camp Green Lake, which is actually a huge desert where he has to dig a massive hole every day in the blistering heat. He slowly befriends the other boys at the camp, including one named Zero, who’s very interesting and we get flashbacks to the days when there actually was a lake and some green in the area over a hundred years before.

I suppose that a big appeal of Holes is the aspect of mystery. There’s a lot that we don’t know: if Stanley is innocent, what really happened for him to get put in Camp Green Lake? Why is Camp Green Lake now a barren desert? And who is Zero? I found all of these things rather intriguing, and finding the answers to these questions was very satisfying.

The heat of the desert is so perfectly captured that even if you’re reading this in the middle of December, it’ll feel like it’s an abnormally hot summer day. But the setting of this book does mean that it makes for a rather good summer read, so that might be something to bear in mind whenever you do get around to reading it.

So, be sure to check out Holes because it’s a real classic. I don’t know quite how to describe it, but there are few novels that conclude themselves quite as well as Sachar concludes this book. Getting from the start to the end is a beautiful journey with the characters and it’s wonderful to watch them grow. I realise that could probably be said of any novel, but I find it especially applicable here.