How Watson Learned the Trick by Arthur Conan Doyle 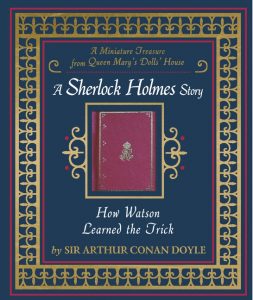 How Watson Learned the Trick is a very short (and obscure) Sherlock Holmes story. It’s basically a small scene from the lives of Holmes and Watson where Watson decides to have a go at deducing things like Holmes does. But is it really as easy as it seems? I won’t say what happens (to avoid spoiling it) but it’s a fun, enjoyable little story.

What makes this story quite unique, is that it was written to be part of Queen Mary’s Dolls’ House. This was a very detailed and impressive dolls’ house which was built in the 1920s. It was full of all kinds of things, from miniature paintings, to miniature wine bottles and was used to showcase the talents of artists and manufacturers across Britain.

Normally, I don’t go into the details of the particular edition of a book that I own, but what I have is a replica of the tiny book held in that dolls’ house. It’s a really nice little thing. It’s a nice bright red and the edges of all the pages are gold and shiny. It comes inside a larger “book” so that it’s got some form of protection and can sit on your bookshelf alongside other books. When you open it up, you’ll see that it goes so far as to have Arthur Conan Doyle’s handwriting copied for all the text. It’s really lovely.

It also comes with a small booklet which explains the interesting history behind Queen Mary’s Dolls’ House as well as talking about the history of Arthur Conan Doyle and Sherlock Holmes (for those who need it.) There’s also a complete transcript of the story, which is useful, since the handwriting is a little hard to read.

So, overall, this is a very welcome addition to my book collection. I recommend it to any fan of Sherlock Holmes. I hope that I will get a chance to see Queen Mary’s Dolls’ House in person one day.