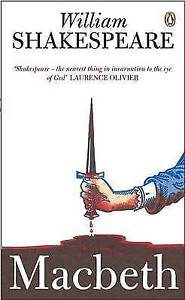 If you don’t know the story of Macbeth, you’ve probably still heard of it – at least through reputation. This is, after all, “The Scottish Play” which some actors feel so superstitious about it (due to its dark themes and witchcraft) that they won’t even say its name. For me, this background information alone put me into an eager state of mind going into it.

The story follows a man called Macbeth, an army general who is told by three witches that he will one day become king. So, along with a little bit of encouragement from his wife, he begins to make plans to murder the king so that he can replace him. As you can tell, it’s the kind of plan which is is going to end up with somebody getting hurt. It is a plan for murder, after all.

When reading, it’s easy to see why the play has it’s gruesome reputation. I was quite shocked by some of the things that happened and even though everybody speaks Shakespearean English and feels one step removed from reality, I still felt for these characters and certain moments did pack an emotional punch.

Nonetheless, I did find the character of Macbeth himself a little unbelievable. He just seemed kind of stupid to me – so easily swayed by others. I didn’t feel like he had a real reason to want to murder the king, based on what we had seen. He simply didn’t feel real. I did, however, enjoy Lady Macbeth (her ultimate fate seemed quite strange, almost mysterious) and the three witches themselves, who came across as quite enigmatic.

If you’re interested in reading any Shakespeare plays, then I guess that this is one of those which you should prioritise. It’s one of the better known ones and, generally speaking, a fairly enjoyable read. Though of course, like all Shakespeare, it isn’t very accessible.