Marked for Life by Paul Magrs 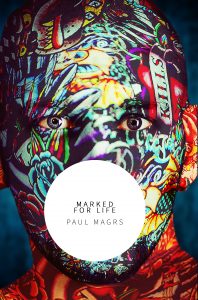 In the introduction to this book, Paul Magrs jokingly describes himself as the creator of the Queer Working Class Magic Realist genre. It was a good start, because it certainly piqued my interest and now that I’ve read the whole thing, I can safely say that it’s very hard to comfortably categorise this as anything else.

Essentially, this book gives us a look into the lives of a group of everyday people – except, of course, like all everyday people, they’re actually quite extraordinary once you look in any detail. There’s Mark, the main character, a man who has tattoos across every inch of his body (hence the fantastic pun in the title) and his wife Sam – I wouldn’t say they’re unhappily married, but it’s definitely lukewarm at best. Added to the mix is their daughter Sally, Sam’s mother Peggy, Peggy’s partner Iris, a policeman named Bob and Mark’s ex-lover/best friend, Tony.

The story is built around Sam inviting Iris and Peggy to spend Christmas with her and Mark, which is significant because she’d struggled to accept that her mother had entered a same-sex relationship and cut off contact with her a a result – but this was an attempt to heal old wounds. I know that’s quite basic, but this novel’s biggest strength is the fact that its characters are all very clearly defined and their interactions with one another are highly interesting. Need I say that drama ensues?

At the centre of it all, you have Mark – someone who’s judged as a ‘weirdo’ for having so many tattoos, but who is probably the most down to earth of them all. He’s empathetic and caring – in contrast to his wife, Sam, who came across as very self-centered and passive aggressive. Then there’s Tony, who remains in the shadows for much of the story (all we see of him are his letters to Mark) and who I found rather enigmatic and even menacing – a puppet master, of sorts. My personal favourite was Iris – a mysterious character who makes some hugely outlandish claims about herself and her past. I’m aware that she has gone on to be the star of many other stories and even to play a significant role in the Doctor Who universe, which I look forward to discovering. It’s easy to see why she was so popular.

There are a few supernatural elements in the book, which might seem out of place to some, in a novel which is otherwise very realistic, but I feel like their blended in perfectly. Magrs has somehow been able to seamlessly slip from family politics to the otherworldly without skipping a beat – it’s very impressive. It’s also rather incidental in that the supernatural elements are just there and not essential to the story. It’s an unusual approach, but it works.

It’s a refreshing novel for giving us perspectives we don’t often see in fiction. I can’t think of any other story with an elderly lesbian couple in it, can you? But these people exist and they have stories to be told – and I applaud Magrs for doing so. Every person in this book feels real and it was a pleasure to be intertwined in their lives and their histories for a time. If you’re looking for a good LGBT novel, then give this a try!