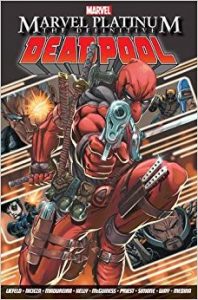 Not too long ago, I watched the movie Deadpool and I decided that I’d like to properly immerse myself in the Marvel Universe. As I had quite enjoyed that film, I thought that a collection of comics featuring the character of Deadpool would be a good place for me to start.

Marvel Platinum: The Definitive Deadpool collects together some of the most significant and highly regarded stories featuring Deadpool and, on the whole, it’s a collection that I really enjoyed. I felt like I had a good idea of the character and his story reading it – and he’s a very likeable character too. He’s funny and entertaining, but that doesn’t mean the stories lack a genuine emotional depth.

The first comic in the collection is Deadpool’s very first appearance. It’s nice to see it, as a sort of historical artifact, but it’s also really hard to enjoy because it’s the middle part of an ongoing story which requires a lot more information. Deadpool just plays a fairly insignificant side character. There were a few other examples, too, where I felt like pre-exisiting knowledge of the universe would be quite helpful. Not a problem for big Marvel fans, but a problem for people like me.

Overall, however, I felt that I was generally given all of the essential information about the character and his ongoing storyline. There are stories about his involvement in the dubious Weapon X project, stories about about his stance in a big civil war (which is explained, don’t worry) and even outlandish stories, like him fighting zombies of past US presidents (which was very good, although I do wish it had that whole arc.) The most recurring (and surreal) plot thread is Deadpool’s ongoing romance with the personification of Death. I love stuff like that.

There are appearance from several other prominent characters in the Marvel Universe and it makes everything feel quite whole and connected. Ultimately, it did what it was designed to do: it left me wanting more. The character was wonderfully developed throughout the different stories (which construct a kind of over-arching story of their own.) I’d recommend it for those who want to get to know the character (or the Marvel Universe in general.) An enjoyable read with broad appeal for comic, sci-fi and superhero fans.