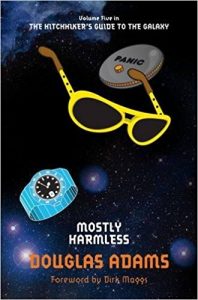 I love the five Hitchhiker’s Guide to the Galaxy novels written by Douglas Adams. He has such a beautifully unique writing style which is both completely absurd and also somewhat profound. That this was the last one he could write before the tragedy of his early death really highlights that loss. The fact that this book is much more melancholy than the others makes it all feel a little sadder.

However, while Mostly Harmless is more sombre than its prequels, it is by no means less of a good read. After it was kind of touched upon on the previous book, the storyline this time has a large focus on parallel universes. It’s often quite thought provoking actually and even rather beautiful. There was a particular scene about a character with no filters as to what they could see that really blew me away.

The story starts with Trillian on Earth pursuing a career as a television reporter. While the fourth book had had a lot of Earth-based scene too, nothing had felt quite so grounded in reality as this opening – especially as this version of Trillian never left the planet. I really like this change as tone, because it helps to stop the plot feeling like random silliness and it gives us something which is quite new for the series.

We soon find that Ford and Arthur have also gone their separate ways (Arthur is now living as a sandwich maker on a primitive version of Earth and Ford is reporting back to the Guide headquarters.) There are a lot of unexpected developments for all of them and their paths end up crossing once again. I’d not like to talk too much about what happens, because part of the joy is how unexpected so much of this is, but you may be particularly shocked by the ending. I certainly was.

But I do have some criticisms. For example, Fenchurch does not appear in this book. She is acknowledged, but only in terms of giving a quick explanation for her absence. This was pretty disappointing, because I quite liked her and I kind of think, can’t Arthur ever have anything good in his life? It’s pretty obvious that Adams just didn’t know what to do with her. It was also a shame not to see Zaphod again, after he had been such a large (and hilarious) part of the earlier novels.

Despite those problems, this is actually my second favourite of the Hitchhiker’s novels. I prefer things to be a little more serious and a little more bleak. It just feels more compelling to me. I can strongly recommend this book. It’s a wonderful finale.