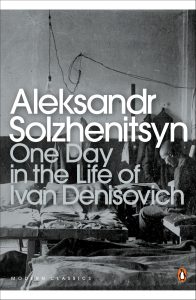 This book is exactly what the title says it is, one day in the life of the character Ivan Denisovich (who’s based on Aleksandr Solzhenitsyn) and Denisovich is a prisoner in a Russian gulag during the reign of Stalin.

I think that it does rather well in the way that it conveys just how poor the living conditions of people there were and how monotonous their lifestyles were. Through the characters you learn about the little habits of the prisoners (which, as the author was himself held in a gulag, are highly likely to be accurate representations) all of which are very interesting to read. The ways that they all keep their morale up through their interactions with one another are especially good. Also, I don’t know why, but I always seemed to feel a little cold when I was reading this book, I guess a sign that the author has written about snow covered winter Russia rather well.

However, as always, I shall say something bad about this book. My main problem with it is that it is actually rather boring, I’m sure at the time of its publication, people would have found it totally shocking and a real page turner, unable to believe that people had been treated so harshly under Stalin. But today, everybody knows that Stalin was a very bad person and so l guess the ‘shock factor’ it had upon publication has been lost with age.

Furthermore, as I said in the title, this really is just one day in the life of a prisoner. There’s no real story and you just read how one day plays out, which can be a bit disappointing if you’re expecting some interesting plot. But then, in a way, by doing this, it has done well by not glamorising gulag life, and the final paragraph suggests to me that it may have been written to intentionally make you feel just as bored as the prisoners… But probably not.

In the end, I would rate this book as a 6/10. I hope this review (or any future or past ones) doesn’t sound too critical, I force myself to say something bad about every book I review, but I still did enjoy reading every one.