Politics and the English Language by George Orwell 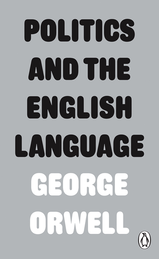 Politics and the English Language is a short essay by George Orwell which covers the various ways in which language is twisted in ways to benefit politicians.

The whole piece is quite anti-government (but then, what do you expect from something by Orwell?) but it never says anything which is unfair. All of his points, I believe, are very valid and something which every person should be conscious of.

He talks a lot about the language used by politicians when discussing war. He points out how, scarcely, when discussing combat, do the words actually reflect what is happening. In reality, extremely horrible things will be happening and the language will not reflect this at all; it will be sanitised because the general public don’t like to think too much about the deaths of ‘enemy’ soldiers because to think too much about that side of war makes it harder for people to get behind it.

Besides this, he also talks about how language can generally be used to conceal the truth and how it’s something which good writers should avoid (as truthfulness is, obviously, very important when trying to convey ideas) and he provides some helpful tips for doing this which is a nice little guide.

This is very short and can be read in a single sitting. Probably as a way to expand it a little, my edition also included a review (by Orwell) of Adolf Hitler’s Mein Kampf. It’s an interesting little addition and it’s nice to have this view of historical events as contemporary happenings. It did feel, to me, a bit out of place, though.