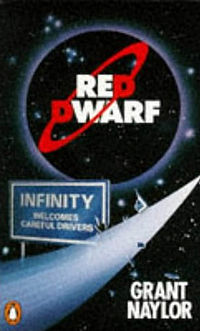 This book ties in with the television series Red Dwarf (in case you didn’t know) but rather than being a book of additional stories set in the same world, or a straight novelisation, it’s more of a retelling of the events of the first two series. Some things happen differently or in a different order, and there are extra things which were nowhere to be found in the series too.

For those who are unfamiliar with Red Dwarf, I shall give you an outline of the story: A rather slobby man named Dave Lister works on the mining spaceship Red Dwarf along with the very uptight Arnold Rimmer. Lister’s misbehaviour leads him to be put in suspended animation for the rest of the flight, but then a malfunction causes a massive radiation leak which kills everybody on board. Holly (the ship’s computer) cannot release him until the radiation levels have gone down, but this takes three million years. When he’s finally revived, all he has for company are Holly, a hologram version of Rimmer and Cat (an intelligent life form evolved from cats.) In an attempt to get back to Earth, they explore the desolate universe of the distant future, having many on-board issues as they go… And it’s also a comedy! There are quite a few good laughs along the way, despite how depressing the premise may sound.

One of the best differences, I think, is that the book seems to take itself a lot more seriously than the television series ever did. Don’t get me wrong, the series is very good and could take itself seriously when it needed to, but this book does it even moreso. The characters are treated a lot more as real people and are given many more serious moments than they ever did in any episodes. Lister, I think, is probably the character who improves the most in the transition from television to book as he is given a much more comprehensive backstory.