Tess of the d’Urbervilles by Thomas Hardy 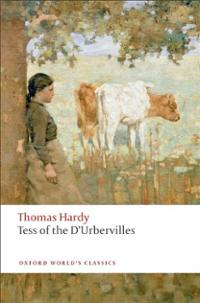 This nineteenth century book follows the life of a poor young woman named Tess Durbeyfield whose family discover that they are actually related to the noble d’Urberville family. You’d then think that this would be a story about a poor family who then suddenly find themselves living the life of the upperclasses, but that’s not it at all. Instead, Tess finds herself coming into contact with a much richer branch of the family in the capacity of somebody who works for them. One bad thing happens and things slowly spiral out of control, getting worse and worse for Tess as the book goes along.

The best aspect of the book, for me at least, was Tess herself. She doesn’t deserve any of the bad things that happen to her, she’s just a nice person who keeps to herself, but her life is just so horrible. She’s one of those characters who you feel so sorry for that you wish you knew them so that you could be nice to them and hopefully make them a little happier. Also, on the flip-side of that, some of the more unpleasant characters are just so unlikeable that you’ll find yourself disgusted with them, so character is a really strong point of Hardy’s.

Another nice point is that this is a nicely progressive book for its era. I shan’t spoil anything, but things happen which would not have been viewed kindly by the society that the book came from, but no judgements are made. Though on the other hand, because of the attitudes of the time, certain things are described very vaguely, and one important scene in particular was a bit unclear to me.

The only real problems I had with the book are that I found it a little too long and I also found the ending a little bit silly. However, I didn’t find them to be reason enough to dislike it! I should also mention, in case it wasn’t obvious from what I said earlier, that this book is a very depressing one, so, if you don’t like to read rather grim things, you might wish to avoid it!