The 500 Hats of Bartholomew Cubbins by Dr. Seuss 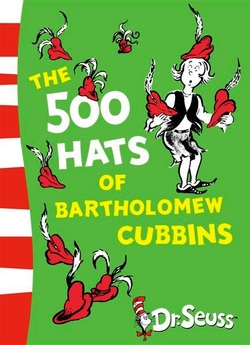 This is one of the earlier (and longer) picture books written by Dr. Seuss. In it, a young man named Bartholomew Cubbins finds himself in a rather unusual situation where every time he takes off his hat, another one is sitting in its place underneath. Of course, this goes especially badly when he needs to remove his hat for the king…

The whole thing is very strange and if you step back and look at it as a story of somebody with a seemingly infinite supply of hats on their head. In fact it’s rather funny. But I have to say that I wish it was just a little bit more clever, or had some kind of deeper meaning, because unless I’m overlooking anything that’s the only thing to it. The ending’s quite nice though and, in a way, it sums up my feelings of ‘well, that was weird’. But it’s all in good fun.

One small downside is the fact that this isn’t written in the characteristic writing style that people might expect from Dr. Seuss. The style is still very light, and there is a rhyme from time to time, but if you’re expecting a story told entirely through rhymes, you won’t get it. The illustrations, though, are very nice. The fictional Kingdom of Didd looks rather pleasant. I quite enjoy the fact that everything is drawn in black and white, except for the hats, as if the hats are the true main characters of the story.

On the whole, it’s a nice little story, even if it does lack depth. Rating: 6/10

(Don’t miss my article “The Influence of Minecraft on Animal Crossing’ on Avoid Drowning.)