The Adventures of Sherlock Holmes by Arthur Conan Doyle 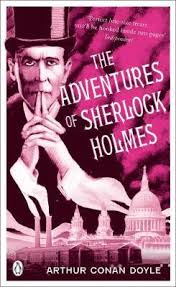 After the first two novels (which were both very good), Arthur Conan Doyle started writing short stories about Holmes and Watson. Despite my love for the full length novels, I actually feel that short stories are a better format for their adventures and the first twelve of them are collected in this book. Here are my reviews of each of these books:

A Scandal in Bohemia
As much as I love him, I have to admit that Holmes does have some rather negative attitudes about women and in this story, he kind of gets his comeuppance. This is the story which introduces us to Irene Adler who never actually appears again in any of the original stories, but who has been used a lot by later authors. Personally, I think it’s one of the best Sherlock Holmes short stories and I really enjoyed its unexpected ending.

The Red-Headed League
Another of my favourites – in this one, Holmes and Watson are approached by a red-headed man who tells them of his successful application to join The Red-Headed League, which pays him quite well to simply spend four hours a day copying out the contents of an encyclopedia. Naturally he’s suspicious – especially when he shows up one day and finds it has disbanded without explanation. An enjoyable, lighthearted tale.

A Case of Identity
A woman comes to see Holmes to help her in regards to the disappearance of her fiance. It seems like quite a run of the mill mystery, but I’m sure you won’t guess what’s actually happening in this one. It’s quite out there, really, which I like. It may be a bit shorter than some of the other stories, but it’s still good.

The Boscombe Valley Mystery
This is more of a ‘straight’ murder mystery after the previous two stories had Holmes and Watson investigating rather more bizarre cases. Holmes is called in to try and defend a man who appears to be guilty based on the evidence so far. We get to see Watson’s wife for the first time since her introduction, we get to see Holmes making side remarks to Inspector Lestrade and I felt like the story and solution were all quite satisfying. Classic Sherlock Holmes.

The Five Orange Pips
An alternative title for this story could be “Sherlock Holmes vs. the KKK” because that’s basically what happens in this story. It’s a little darker than the average Holmes story, but I really like the premise. What I particularly enjoyed about it, is the fact that we get to see that Holmes and Watson (and, of course, Conan Doyle himself) were on the right side of history, in regards to racism.

The Man With The Twisted Lip
A woman comes to Holmes to tell him that her husband has disappeared. He was last seen looking distressed in the window of a known criminal – who then denies he was ever there. I don’t think anybody is likely to guess exactly what happened to him, because the resolution of this story is so bizarre, but it’s also quite comical. We also get a glimpse of the kind of things Holmes gets up to when Watson’s not around, which I appreciated.

The Adventure of the Blue Carbuncle
A nice Christmassy tale which all starts when a client comes to Holmes to tell him that he has been erroneously given a Christmas goose that he never ordered. This ultimately turns out to be part of a much larger case. I like the Christmas setting and, while I don’t want to spoil anything, I like that this story gives us a bit of moralising from Holmes.

The Adventure of the Speckled Band
This is actually the one which Conan Doyle himself thought was the best Sherlock Holmes story. It’s a good one – although I don’t quite think it’s the best. A woman tells Holmes that her sister died after a bizarre experience a couple of years ago and is now worried because she has had that same bizarre experience. The ending is quite dramatic. I liked it.

The Adventure of the Engineer’s Thumb
This might just be the best story in this collection – or, at very least, a contender (a lot of the stories here are pretty great). Watson finds himself with a patient who has recently lost his thumb under some concerning circumstances, which ultimately leads to Holmes getting involved. While some of the stories are quite lighthearted, I find this one pretty darn disturbing and it has some rather violent imagery too. Really tense, really suspenseful, interesting and satisfying!

The Adventure of the Nobel Bachelor
Unfortunately, what may be the best of these stories is followed immediately by what is probably the worst. Holmes investigates the case of a woman who disappeared on her wedding day. I didn’t think the general premise was that interesting and the resolution wasn’t particularly exciting either. Nonetheless, this is still an enjoyable read because it’s full of that Holmesian charm! It’s entertaining to read about Holmes interacting with Lestrade and his client. I think Sherlock Holmes is generally one of those characters who I’ll always enjoy reading about – regardless of the story he’s in.

The Adventure of the Beryl Coronet
While the previous story is my least favourite in this collection, that brief dip in quality is instantly rectified with ‘The Adventure of the Beryl Coronet’ – in it, a man has found himself responsible for a very valuable gem (the beryl coronet) and wakes up one morning to find his unreliable son holding it in his hands (with some gems broken off it and missing) and he asks for Holmes’ help in finding out where they are. What I like about this story is that you’re given a house with several people in it, you’re given a crime and you’re given their alibi and you can kind of piece things together yourself. I’d figured out what really happened before the end and that felt good.

The Adventure of the Copper Beeches
The anthology ends with another rather menacing story. A young woman has been given an opportunity to work as a governess for exceedingly good pay, but has been told she needs to cut her hair short and do various other bizarre things on a regular basis, making her, understandably, concerned. It’s really hard to figure out what’s going on in this one and it’s one of the darker stories in the collection. I was genuinely concerned for the woman as the story went on, as the other characters were very sinister. It definitely ends on a high note.

On the whole, a fantastic collection and one which I think most people would enjoy. I am very, very fond of these short stories and many of the best ones are contained within this anthology. If you want to get into Sherlock Holmes stories, it could be a great place to start.