The Call of Cthulhu and Other Weird Stories by H. P. Lovecraft 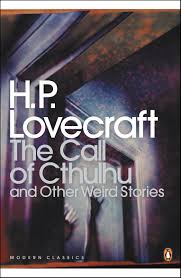 Over his very large number of short stories, H. P. Lovecraft created a huge mythos of ancient aliens, dream worlds and a vast variety of other frightening things. This collection of his works gives you a nice selection of them. Plus, there are some nice additional notes from S. T. Joshi, which I wouldn’t normally mention, but they are especially interesting.

Dagon:
This tells the story of a man who finds himself all alone on an island which has been raised from the bottom of the ocean. To his horror, he’s not the only thing on it. This is tense story and it’s shorter length is in its favour. One of the best.
Rating: 9/10

The Statement of Randolph Carter:
This story has the first appearance of Randolph Carter, a man who would become a recurring character in Lovecraft’s stories. Here he has arranged to explore an ancient tomb of some sort. This one is also rather short, but again I think that works very well for it. Another highly enjoyable story.
Rating: 9/10

Facts Concerning the Late Arthur Jermyn and His Family:
Arthur Jermyn has a secret in his family history, one which he is entirely unaware of. Sadly, when we find out what exactly it is, it’s rather silly and the story on the whole isn’t especially creepy like the others, either. There’s more than a small degree of Lovecraft’s racism present here too. The worst in this anthology.
Rating: 5/10

Celephaïs:
This story gives us a small view of Lovecraft’s dream world. This rather short story sees a man become increasingly obsessed with a town that he visits in his dreams, with dire consequences. It’s not the best, but it’s an enjoyable enough read.
Rating: 7/10

Nyarlathotep:
This is the introduction of one of Lovecraft’s best known villains; the titular Nyarlathotep. He is one of his many ancient aliens, but with a difference. Unlike the rest, who have no interest in the wellbeing of humanity one way or another, Nyarlathotep especially likes to meddle in their affairs. The tension here comes from the fact that all along you know something’s not quite right as Nyarlathotep grows in popularity amongst people.
Rating: 7.5/10

The Picture in the House:
This one’s quite different from Lovecraft’s other pieces, because the horror of it is very human. A traveller stops to stay in an old shack in order to hide from a storm, only to find a creepy old man in there. It’s a bit generic, but is definitely not bad.
Rating: 7/10

The Outsider:
This is my favourite piece of Lovecraft’s. It seems to be a kind of fantasy piece (presumably taking place in his dream world) and it features a very lonely character who lives by himself in an old castle. I don’t want to say too much about it, because it’s not all that long and I’d hate to spoil any of it. All I’ll say is that the whole story is excellent and the ending is sublime.
Rating: 10/10

Herbert West – Reanimator:
This is one of his slightly longer stories and I’m almost tempted to say that it’s intentionally a bit silly, but I’m not entirely sure if that’s the case or not. Here an unnamed narrator tells us all about his involvement with a man named Herbet West who has found a scientific means to bring life back to the dead. Do I even need to say that that isn’t going to work out? It’s a lovely piece, if a bit predictable. The main downside comes from the fact that it was originally serialised in a magazine and therefore every chapter starts with a recap of the last.
Rating: 8/10

The Hound:
A couple of people rob graves for a living/fun. It’s another situation where you can only think ‘How long before that goes wrong?’ Interestingly, this novel contains the first appearance of the Necronomicon, a book which appears again and again throughout his work and could even be said to be his most famous creation. Otherwise the story is a little forgettable, but luckily isn’t too long.
Rating: 6/10

The Rats in the Walls:
This one’s quite long, but suspenseful. It takes place in a giant mansion and while all of Lovecraft’s work is very atmospheric, this story is especially so. Very often, the narrator hears rats running through his walls and in the end he discovers that his house holds quite a secret. Nice and creepy, although there is some rather embarrassing racism in it.
Rating: 7/10

The Festival:
At Christmas time, a visitor comes to a creepy town, meets a creepy tour guide and finds things to be rather amiss. While this is another one with an especially good atmosphere, certain things are a bit silly, even though they’re supposed to be serious. Too much suspension of disbelief is required. But again, it’s not bad just not great.
Rating: 6/10

He:
This is a fairly interesting story with elements of time travel. The racism is present again, sadly, but it’s a nice and unique story.
Rating: 7/10

Cool Air:
This story features a man who has a strange, almost, fear of cool air, which he proceeds to share. Looking back, the ending twist might be a bit obvious, but I certainly didn’t notice it on my first read through and so it still worked for me. Whether or not anybody else would be so lucky, I’m a little unsure.
Rating: 7/10

The Call of Cthulhu:
This one must be Lovecraft’s best known work. It has all the staples he’s associated with: doom filled prophecies, crazy cultists, horrifying cities and forgotten histories. Of course, this story is also the one which introduces Cthulhu who may not have been featured in all that many of Lovecraft’s own stories, but it has featured in many pieces by other authors. It’s iconic story, and it is good, it’s only failing, I feel, is that it’s a bit too long. Dagon is a very similar story and a bit better too.
Rating: 8/10

The Colour Out of Space:
This is another of the slightly longer ones, and it deals, very subtly with alien influence on a small countryside area. Things get worse and worse slowly as the story goes along. Right from the start you know that it all goes very badly indeed, and this gives it all a big sense of dread. It also deals with a colour which is supposed to be different from any that we know of. It’s a tad long, but otherwise quite enjoyable.
Rating: 8/10

The Whisperer in the Darkness:
A man named Albert Wilmarth investigates reports of very strange goings on in the countryside, exchanging letters with somebody who lives there. Something about this story, perhaps the fact that it’s mainly written in exchanged letters, gives it a feeling of being real, like you’re reading actual old reports of strange creatures. A lot of Lovecraft’s work aims for that, but this one does it especially well.
Rating: 9/10

The Shadow Over Innsmouth:
This story is a kind of sequel to Dagon as it greatly elaborates on many of the things introduced in it. A man comes to stay in a town called Innsmouth where there is supposed to something strange going on. The setting works very well and the discoveries about the town as the story goes along are both unexpected and creepy.
Rating: 8/10

The Haunter of the Dark:
This story deals with a creature which can only exist in darkness. While this part of the story is very exciting and enjoyable to read, I find that the earlier parts are a little too drawn out. This is another of the longer stories and it could certainly do with being cut down.
Rating: 6/10