The Call of the Wild by Jack London 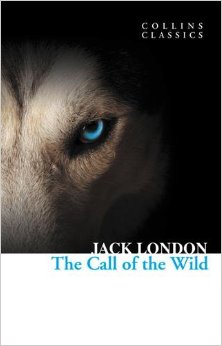 Jack London’s early twentieth century novel, The Call of the Wild, tells us the story of the life of a dog named Buck. Before you think to yourself “Oh, it must be a light-hearted romp about a taking dog” I have to warn you that this is a rather serious, depressing and realistic story.

That’s something which I thought was one of the novel’s strong points: despite the fact that the main character is a dog, he’s barely been anthropomorphised at all. I shan’t say that he hasn’t been anthropomorphised at least a little bit, because I think the very nature of our language would make it impossible to avoid doing so, but he’s certainly done a good job with Buck’s characterisation His thoughts are all very basic and black and white and he doesn’t really understand a lot of the things that are happening to him. It’s quite sad really, especially if you’ve ever known dogs, because it makes you feel very sorry for Buck.

However, while I think that Buck was developed as a very good character, I also felt that the human characters were a little lacking. I suppose it could be because we see everything from Buck’s point of view, but I never really felt like I got to know any of the humans. Plus, some of them speak with accents and, rather than just saying that they speak with accents, the accents are actually written into their speech (if that makes sense) which can be a little annoying and is a lot harder to understand than if you were actually hearing these accents.

But these were just a few minor problems with an overall good book. As soon as I’d finished I thought to myself that the storyline seemed a bit structure-less, and I thought that was a bad thing, but on reflection, I think it actually helps add to the sense of realism. In reality things don’t always work out and things don’t always tie nicely together, and the same is true of The Call of the Wild. Sadly, I did occasionally feel a little uncomfortable about certain offensive attitudes which were reflected in the text, but thankfully not too often.

So, I do recommend this book. It tells a superb, and very sad, story, with only the occasional off-moment. Rating: 8.6/10