The Chimp Paradox by Steve Peters 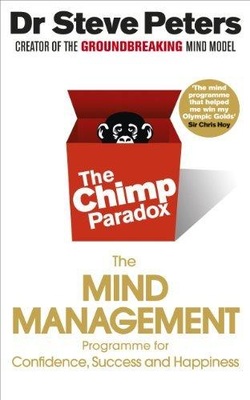 This is a psychology book which has basically been written in order to try and help people to be happier in life. The main point of the book is that there are two sides to your mind: the ‘human’ side and the ‘chimp’ side. The human side is the rational side which works logically and thinks based on evidence, whereas the chimp side is the emotional side which can be illogical and thinks based on emotions and feelings rather than facts. The ‘paradox’ of the title is that the chimp can at times fill you with confidence and make you believe you are wonderful, and other times it can fill you with self-hatred.

The main premise of the book, the chimp/human differentiation is one I quite liked and which I find very agreeable. Before reading it I’d kind of made the distinction between rational and irrational states of mind, so it’s quite nice to have it confirmed by a psychologist. It also offers some handy advice: if you can identify when you’re thinking irrationally, why listen to those thoughts? Which was a very good point, I thought. I did think, however, that the main chimp/human difference was repeated far too often and it did feel you were reading the same thing loads of times by the later chapters.

There were also two aspects of the book that I did find disagreeable and seemed to be in there, not as a part of humanity’s universal psychology, but as products of our society, and negative ones at that!

First, I don’t think that this is the book to read if you are somebody who struggles a lot with their weight. Our society is already bombarding people with the message “you need to be thin” all the time, and this book does nothing but add to it. It says that, when somebody is on a diet and they give in and eat a slice of chocolate cake (for example) that this is their chimp hijacking them and forcing them to eat badly. This is likely to make people on diets feel even worse when they give in like this. Instead of saying “Oh well, it’s just a piece of cake” it’s saying “Oh, what have you done you silly chimp?” I think a far better thing to say would be: you don’t need to be thin to be healthy or attractive; the need to lose weight stems from your chimp and it is forcing you to diet so it can be what society expects it to be, punishing itself when it fails.

Secondly, the book said something along the lines of “If you’re in a relationship and find yourself attracted to somebody else then that is your chimp has hijacked you again!” which seemed, to me, to be quite close minded. There have been (and still are) societies where polygamy is perfectly acceptable, and there are people in polygamous relationships where all those involved are perfectly happy. Therefore it’s only reasonable to assume that some people are naturally polygamous and some people are naturally monogamous. So, I didn’t think it was right to ascribe that behaviour to the chimp.

So, on the whole, it was a little bit of a mixed bag. There were times when I’d read bits and think “What an excellent and helpful idea!”, times when I’d read something and think “but that’s not how my mind works at all” and other times (like I mentioned above) where I’d find it plain disagreeable.  Luckily, I think the good outweighs the bad.