The God Delusion by Richard Dawkins 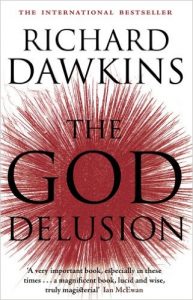 Before reading this book, I’d read a lot of complaints about it saying that Richard Dawkins writes in an arrogant and offensive kind of way. In fact, after seeing a couple of documentaries by him, I kind of expected the same thing. But I have to say that I really don’t think this is true, despite the fact that he even seems to think that it is, as he often seems to be almost apologetic and justifying everything that he says. So if you’ve heard that this is a rather arrogant preachy book, you’ve heard wrong, and you should give this a chance.

While the title of the book is ‘The God Delusion’ Dawkins doesn’t actually argue against the existence of God all that much, he uses the ‘But who made God?” argument a few times, but generally he seems to be arguing against religions, rather than God. Indeed, he actually only says that there is ‘almost certainly’ no God, and never makes arrogant claims that suggest he actually knows.

But what he does argue against a lot is both religion and creationism. He argues, quite well in my opinion, that religious thinking is very bad for science as it stops people questioning and keeps them content with faith, and also thinks it immoral that children are indoctrinated into the same religion as their parents when, he says, a child cannot really understand religions and should be allowed to make the decision at an older point in their life (which is also very convincing). He also talks about the extent to which atheists suffer prejudice in America, which is actually pretty surprising once you read it. Plus, as a kind of little bonus, he goes into the crazy world of quantum mechanics at the end.

So, on the whole, this book is fairly argued and well written. There are several funny little jokes and anecdotes that he slips in every now and then and he makes several pop culture references which make it a little more enjoyable. The downside is that, as Richard Dawkins is a biologist, the tone becomes a little too scientific and hard to understand when he is talking about evolution, and, as I said before, the book does not really fully fulfil its task; he seems to argue well against religion and creationism but not so well against the idea of God itself. So on the whole, I’d rate this book as an 8/10.