The Return of the King by J. R. R. Tolkien 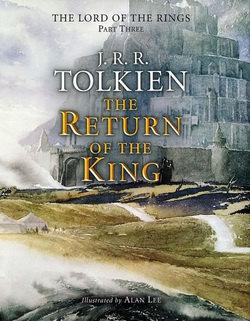 This is the third and final book in the Lord of the Rings trilogy. I heavily suggest that you do not read this if you haven’t read both the first and the second books too. Together, they form one very long book.

Much as with the second, the story is not told linearly. You find out how the war is going for the first half, then it cuts back to Frodo and Sam in Mordor. This means that, again, you have a very long wait until the previous novel’s cliff-hanger is resolved! That one was a pretty big one too, so that was very suspenseful.

There are some big shocks in this book which make it quite an exciting conclusion, but, by this point, there was something I’d noticed Tolkien does a little too often. Specifically, a character will be killed off and a big sad event will be made of it, only for them to have magically survived somehow afterward. Once or twice, is okay, but not as many times as it’s done, I can’t help but feel he was a little afraid of killing his characters. This book also features a return of the boring battle scenes that the previous one had, which is a shame.

But, that said, there’s still lots to enjoy in this book. I’ve said before that each of his books tend to have at least one really interesting or really likeable character and this time it is a woman named Éowyn, who had actually appeared in quite a small capacity in the previous book, but here she has quite an exciting role to fill. I was also very pleased with the ending; I shan’t spoil it, but, it wrapped everything up nicely and certainly did not disappoint. On the whole, this book is equally as good as the second in the trilogy, but sadly, not quite on the same level of the first. Anybody who’s read the first two should definitely finish the story with this!