The Strange Deaths of Batman 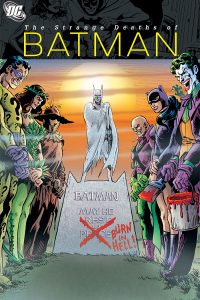 The Strange Deaths of Batman is a graphic novel which collects together various comics which deal with the death of Batman. As the title implies, many of these stories are actually rather weird. As somebody who is quite a fan of the weird side of comics, I was naturally drawn to this collection. Here’s a break down of each story:

The Strange Death of Batman by Gardner Fox
The first story is the one that the collection gets its name from. At first, it’s a standard story about Batman and Robin facing an unusual villain called The Bouncer (who can bounce like a rubber ball.) Batman and Robin save the day and the story ends. It then cuts to the author in his apartment, who is wondering just what might have happened if The Bouncer had killed Batman – we then get to see this scenario play out! The ending is really weird. Rating: 7/10

Robin’s Revenge by Cary Bates
This story gets started right away, with Batman, Robin and Superman coming up against a villain. He is quickly able to kill Batman by trapping him in a glass dome and incinerating him. The villain gets away and we then get to see what happens to Robin as the years go by without Batman. I liked this one quite a lot – especially the emotional depth. Robin and Superman get some good development and there’s a nice twist ending. Rating: 8/10

The Corpse That Wouldn’t Die by Bob Haney
Batman investigates the disappearance of a woman named Debbie Manton – somebody he seems to care about very much. However, because he is too determined, he becomes reckless and is killed during the investigation. But death is not the end. Another DC hero, (called The Atom) shrinks himself down to a tiny size and enters Batman’s body, which he controls by manipulating his brain. A little grittier than the last two, and another which I quite liked. Rating: 8/10

Where Were You the Night Batman Was Killed? by David V. Reed
Batman is dead… but nobody knows who killed him. The villains of Gotham City are having a trial in order to determine who is responsible for his death, because in the criminal underworld, this is something to be very proud of. Catwoman, The Riddler, Lex Luthor and The Joker all have their own stories, about who it was they who killed Batman. Two-Face acts as the prosecutor and Ra’s al Ghul is the judge. It’s perhaps a little longer than I’d have liked, but it’s still nice that all of these characters have something to do. The Joker’s part of the story was my favourite. Rating: 7.5/10

Buried Alive by Gerry Conway
Batman wakes up inside a coffin, buried underground. Robin and Superman realise that he is missing and have to work to find him as quickly as possible – he only has a limited amount of air in that coffin after all! A good suspenseful story and I liked the ending quite a lot. Perhaps my favourite one. Rating: 8.5/10

The Prison by John Stanisci
Ra’s al Ghul tells his daughter Talia that she must kill Batman in order to prove her loyalty to him. It’s quite a basic story, really, but I quite like the art style and the way that the story is told. I like the al Ghul family, so I am pleased to see them featured in another of these stories. Another of my favourites in this collection. Rating: 8.3/10

Modern Romance by Chuck Dixon
The shortest and probably the worst story. Batman and Catwoman get married and, as you can imagine, they’re not an ideal couple. Also, the ending is pretty rubbish. Rating: 5/10

So I’d say it’s a collection worth investigating – especially if you’re already a big fan of Batman or DC in general. If you’ve never really dipped into the strange side of comics, perhaps this would be a good place to start? I found this collection for quite a low price and I thought it was good value for money. I definitely enjoyed reading it and I’d recommend it to others. Although it is a bit of a shame that the stories lack the depth which you’d find in graphic novels which focus on a single plot.