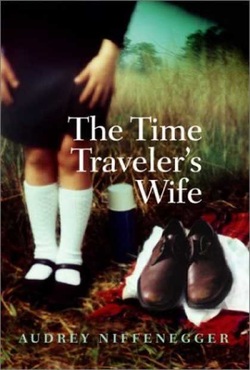 The Time Traveler’s Wife is a love story about two characters named Henry DeTamble and Clare Abshire, but as I’m sure you can guess from the title, there’s quite a time travel twist to it all. I should point out right away though, that the title does not refer to the character from The Time Machine by H. G. Wells (who is only known as The Time Traveller) as I initially thought it might be, when I heard about it.

The time travel in this story is of a rather unique kind. Henry DeTamble suffers from a genetic problem which causes him to randomly travel through time to different points in his life and he can’t bring anything with him when he does either; he always just appears, completely naked, in random places. As you can imagine, this leads him into all kinds of awkward situations! Interestingly, the story isn’t told chronologically, instead you get smallish sections from either the point of view of Henry or Clare where it tells you both the date and their age (which in Henry’s case, don’t always correlate) and they tell you what’s happening to them in present tense. You can tell that a meticulous amount of planning went into it and if you really loved the novel, you could note down all the dates and go through it chronologically on your second read through.

Outside of the time travel, I really quite liked reading about the regular lives of Henry and Clare. Henry works in a library and is a very literary man and I rather enjoyed that side of him, even if he does occasionally come across as slightly pompous. In her younger years, Clare lives in a huge house in the countryside and it’s such a wonderful setting that gives a feeling of ease and peacefulness. Plus, once they’re a little older, the pair of them always seem to be going off and doing such nice things, like having meals with their friends and so on, and I enjoyed reading about it

But sadly, The Time Traveler’s Wife falls short in a few areas. The idea of determinism governing everything comes up a few times and it leads to Henry pretty much letting  a disaster happen without even trying to stop it. Indeed, Henry’s behaviour is a bit strange at times. There’s one scene, for example, where two teenage Henry’s have sex with one another. What a silly idea that was! I also feel like things become a little too bleak at times, the very ending is a perfect example as all it does is make everything much more depressing and has one of the characters being rather immoral. I also couldn’t help but cringe at all of the sex scenes; they seemed to be especially bad.

On the whole, though, this is an interesting story with lots of emotion and compelling characters. It has a couple of downsides, but it’s still very good and its unique ideas are rather well executed. Rating: 8.7/10