The Waltons: Trouble on the Mountain by Robert Weverka 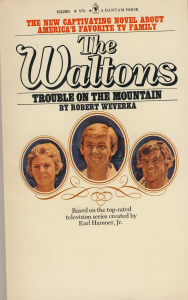 For generations, people have asked the question “What if two episodes of The Waltons, namely “The Typewriter” and “The Separation”, had happened at the same time?” and in The Waltons: Trouble on the Mountain, Robert Weverka answers that question. Okay, to be honest, nobody ever really asked that question before (probably not even Waltons fans) but I still thought that this was an enjoyable read.

So, for those who don’t know the synopsis of every single episode of The Waltons (like I do) the plot is as follows: John-Boy secretly borrows a typewriter from the Baldwin sisters so that he can make a typed submission to a publication he wants to have a story published in.  The reason he has to do it secretly, is that his mother and grandmother both dislike the Baldwins for unknowingly brewing a recipe which is actually bootleg whiskey. Meanwhile, the family are experiencing money troubles and there’s a very real risk of their electricity getting cut off. As a result of all this, certain tensions build between Esther and Zebulon.

I think a part of the reason that these two episodes were merged into one story, was that it meant that this book focused on all of the Walton family (rather than just two or three of them.) The way the two plots are woven together is quite clever and, at times, fills in small gaps in the plot which were left unfilled on the TV. It also provides us with an opportunity to see into the heads of the characters and know their thoughts, something which I really appreciated.

Overall, it’s a nice story which gives all of the adult Waltons a chance to do what they do best. If you’re a Waltons fan and would like to see a new take on these two stories, I suggest giving this book a try! If you kind of like The Waltons, but wouldn’t quite call yourself a fan, this is a chance to read a potentially new (for you) story about the family and if you’ve never heard of The Waltons, it’s quite a short book so you wouldn’t have much to lose by giving it a try. I certainly enjoyed it (though I do take issue with it being described as a “brand new adventure” in the blurb!)

This entry was posted in Book Reviews, The Waltons. Bookmark the permalink.