The War of Art by Steven Pressfield 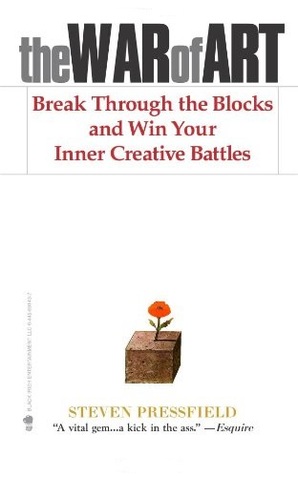 This is non-fiction book which sets out to help its readers overcome any forms of creative block and get on with their own projects. The main focus seems to be on writing (as Pressfield himself is a writer) but he says that it can be applied to any kind of art, or business venture, or whatever it is you want to do. Perhaps, as a writer, I’m a little biased, but I liked the way that this was applied to everything and I think that it worked rather well and will probably make the book more accessible to others.

The main thing I took away from The War of Art was the idea of Resistance (with a capital R) and the various ways that we can counter anything that may hold has back when we’re trying to work. He identifies things we may be doing to hold ourselves back without realising, which was often rather interesting. This all seemed pretty sound and pretty standard. I’d have liked a bit more solid advice, as it was mainly about what to avoid, but I do think that it might have been for the best that he avoided more specific advice, since everyone works differently and on different things, and this may have spoiled the fairly universal appeal of the piece.

But while the first half is a pretty good, pretty helpful and generally what you would expect from a book that’s designed to help motivate you with your projects, the second half is quite weird. There were times when he was talking about the nature of existence, how all people are just different aspects of God, how there are different spheres of reality and William Blake and it all seemed a bit incoherent. Without wishing to appear judgemental, it is around this time he also mentions that it is good to consume recreational drugs, so I can’t help but wonder if these parts were written under the influence.

On the whole though, this isn’t a bad book. If you’re wanting to get started on a project but don’t quite feel motivated, I think reading this might just give you the push you need. It’s also quite a pleasant read too; it only has small sections to read at a time meaning you can breeze through it at your own pace. It’s downsides come from becoming quite derailed at times and moving away from the main topic, as well as what I considered to be a slightly too idealistic point of view. It seems like he thinks that every person who isn’t a huge success is only not a huge success because they didn’t really believe in themselves, which I’m sure is easy for him to say, since he became a success, but I am sure there are lots of people who try as hard as they can and still don’t succeed due to external factors; to suggest it is all internal seems both naïve and inconsiderate. Still, a good read nonetheless.

This entry was posted in Book Reviews, Writing. Bookmark the permalink.