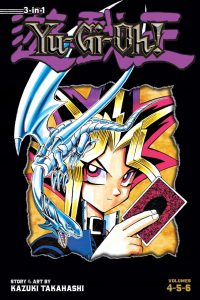 I have to admit, that after reading volume 3 of Yu-Gi-Oh! I was worried that the series might become somewhat formulaic (and here’s my review of the first three volumes, for reference.) To a small extent, that is true, but the series continued to provide me with enough exciting twists and turns throughout the next three volumes, so my fears ultimately turned out to be moderately ungrounded.

The most interesting storyline dealt with the return of Kaiba, who was after revenge against Yugi. This revenge takes the form of a dark and twisted version of an amusement park. Once again, I was shocked by the levels of violence (people die!) that surround the child main characters and the story was really quite gripping. I genuinely feared for their lives. Kaiba also received an interesting backstory, which I appreciated. There’s also a really lovely scene about the enduring power of friendship, which resonated with me on a personal level.

I was also quite pleased with the development of some of the other characters. In the first three volumes, I’d been a little unsure about Jonouchi, but he’d really grown on me by the end of volume 6. Honda was another character who’d appeared previously, but it wasn’t until now that I really started to like him. Yugi and Anzu are, of course, on top form as usual.

While Kaiba’s “Death-T” revenge storyline was the most interesting part of these three volumes, there were other parts I quite liked too. At one point, yo-yos are the next big craze in the school, which entertained me since I am a yo-yo bozo myself. Towards the end, a very interesting new character was introduced and I look forward to seeing more of them in the later volumes (but can’t say anything without spoiling it!)

Overall, I was happy with these three volumes. They had that same mixture of teenage humour and innocence, spliced with horrific violence and death. If you liked the first three, you’ll probably like these three too. Although, I have to say, that I think I enjoyed the first ones just a little bit more.