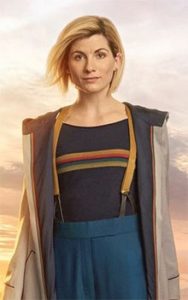 Yesterday, Jodie Whittaker’s first series in Doctor Who came to an end. Some people love her, some people hate her (just like every other Doctor) and as a rabid fan of the entire Doctor Who universe, I thought I’d take a few minutes to share my perspective.

To put it simply, I fall into the group of people that love her. As a concept, I never had an issue with the Doctor regenerating into a female body. It makes the character more interesting, knowing that their sex can change during regeneration and I like that it confirms my reading of the character as one who is genderless. Having said that, when they first announced that the Thirteenth Doctor would be female, I did have some concerns; mainly, that it would be handled and written really badly. After all, they did once write a female Doctor for a one-off alternate universe audio adventure and she gave up adventuring and became an alcoholic Sainsbury’s employee… so it can be done badly.

Thankfully, my concerns were completely ungrounded. The Doctor regenerated into a woman without skipping a beat. I was worried that they were going to make a huge deal about it and then have stupid jokes “oh, what are these things on my chest!?” but instead, she takes it in her stride – as a member of a sex-changing race would do. Her gender was only really an issue in an historical episode where she wasn’t taken seriously at all, causing her much frustrating and creating an interesting new dynamic.

I was also worried because I really, really liked Peter Capaldi’s Twelfth Doctor. For a long time, the Patrick Troughton’s Second Doctor was my favourite, but the Twelfth managed to dethrone him. What I enjoyed about him was that he was a slightly darker Doctor (at least at first) who grew to realise that he shouldn’t doubt himself and that it was okay for him to express his emotions. He had a really great character arc and I hope that he’ll be remembered as one of the greats. Coming after that, I thought any Doctor might be a disappointment.

Thankfully, I was not disappointed in the slightest. The Twelfth Doctor, especially towards the end, had a lot of unhappiness in him. He spoke a lot about how had kept losing people and even how he wanted his life to end. It made for some really engaging and emotional viewing – but the Thirteenth Doctor is almost the opposite of that. She’s possibly the most upbeat and optimistic of the Doctors. Not only did this make for a refreshing change (and how many main characters, in all modern media, struggle with a lot of inner emotional conflict?) but I think that it works well in the greater, overall narrative of Doctor Who. The Twelfth Doctor nearly chose to end his life, rather than to regenerate, so as a survival instinct, he regenerated into a person who a happier perspective on the world.

The criticism that I see aimed at this series most often, is that Doctor Who is too “politically correct” now. In general, I think this term is tossed around far too often, but I will admit there are times where it applies. For example, To Kill a Mockingbird was recently removed from a school curriculum for containing offensive, racial language. In my mind, “political correctness” is the desire to censor things in order to appease people across the political spectrum – often at the expense of ignoring that certain issues and historical facts exist. And let’s be honest, if To Kill a Mockingbird were written today, some people would accuse it of being ‘too PC.’

So, I would absolutely not say that this criticism applies to this series of Doctor Who. They tackle social issues that exist within today’s world and highlight several socially significant historical events too. It’s thought provoking and much better than when they would completely ignore these issues in previous historical episodes (which, I would argue, is much more ‘politically correct.’) There was a greater sense of seriousness and integrity throughout all of the episodes and that is something I have been craving for some time now.

I’ll admit that one of her three companions, Yaz, is a little bit underdeveloped, but she’s still likeable and I expect that we’ll get to know her over the next series. The relationship between the other two, Ryan and Graham, was fantastic and I really enjoyed their presence on board the TARDIS. They’re very different to the companions we’ve had before. And it’s not just them – everything is different and it works really well. In order to survive as long as it has, Doctor Who needs to keep changing like this.

So I hope this era of the show lasts a long time, because I am very happy. I can’t wait to see what happens next.