I got up to my bedroom and I was planning to go to bed. There was a chair in that room and it wasn’t a vacant chair – in it, sat Colin the Cow. Of course, in real life, Colin is the same size as an average finger puppet (which is what he is) but in this dream, he was about the size of a human being. As is often the case in dreams, this didn’t strike me as particularly unusual.

Something did strike me as particularly unusual though – Colin wasn’t sitting up straight. He was tipping to the side a bit, so I moved over to straighten him up. I put my hands onto his shoulders and was unnerved to feel the shoulders of a real person, rather than the softness of an inanimate object. Before I could properly process what this meant, Colin’s arms moved up and grabbed mine. Then, from underneath his happy wooden face, I heard the deafening scream of a horrified child. He wouldn’t let go of my arms, he was gripped on too tightly and the screaming grew louder and louder. 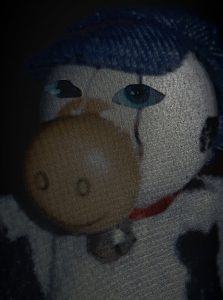 This entry was posted in Dreams. Bookmark the permalink.