As a child, I was always very fond of the game Top Trumps. I used to really love collecting all the different packs, because for me, there’s something very satisfying about seeing different people listed and ranked based in different stats and figures. I guess I just love seeing information categorised. Especially when numbers are involved – especially when you’re encouraged to compare those different numbers. Oh my.

I think what also helped to sell me on the idea was that many things which I really liked had Top Trumps sets. For example, there was The Simpsons (which I was kind of obsessed with as a kid), Doctor Who (which I remain obsessed with as an adult) and lots of other pieces of popular culture from the early 2000s. Being a completionist, I bought a lot of the other ones too, like the dinosaur set and the shark set. The art and pictures in those ones were very nice as well.

It got to the point that I started to look at the company’s past. I was amazed that Top Trumps appeared to be older than I was. Looking back as an adult, some of these older ones are the ones which impress me the most. Back then, they were much less focused on making film and television tie-ins, but instead on making their own unique creations.

Two older packs that I was most fond of were “Fantasy” and “Goblins & Faeriefolk” which included some really beautiful artwork. There’s that kind of pulp fantasy style to these ones and I love it. I was also fortunate enough to get my hands on The Ultimate Pack – which was a pack were each card represented another pack. I liked this, because it seemed to tie everything together as a kind of Top Trumps universe. Though I don’t really buy them anymore, I will always cherish my collection and am glad that I never sold them. 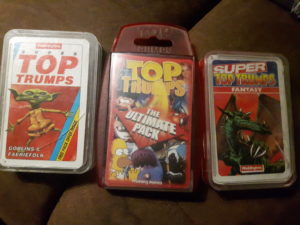 This entry was posted in Lovely Things. Bookmark the permalink.