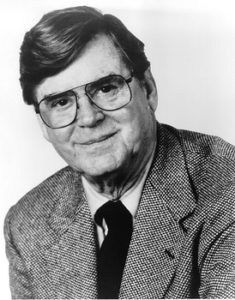 Today was a sad day because today was the day that Earl Hamner died. Since I read his book Spencer’s Mountain in 2009, he has been my favourite author (or at least one of them, it fluctuates a bit) and I also enjoyed hearing him narrate every episode of The Waltons and knowing that he was the real-life version of John-Boy Walton, one of my favourite fictional characters. In 2013, I wrote a short personal essay called “Why The Waltons is Wonderful” and it was included in a book which was given to him on his 90th birthday. After that he sent me, and the other contributors, a lovely thank you via email. In the email he said that if any of us ever happened to be in his area, he would buy us dinner. Living in the UK, I thought my chances of being in his area were, sadly, quite low, but I always hoped that I would one day be able to take him up on that kind offer. Having dinner with people is probably my favourite thing to do, so you can image how much I would enjoy having dinner with one of my heroes! I also emailed him and asked whether he’d like to write a Trusty Water Blog post about writing and he said he was very busy, but he’d get around to it when he had a chance. Just a day or two ago a friend suggested I should send him another email. Of course, my connection to him is minimal, but I’m still very sad to know he’s no longer around. Still, his story, his life and his work will continue to inspire me.

This entry was posted in Memoriam, The Waltons, Writing. Bookmark the permalink.