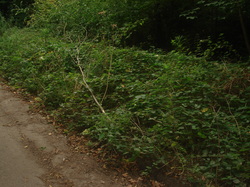 Yesterday I was walking the dogs through a place called Pockeredge Drive. Pockeredge drive is a lovely quiet road that goes through a moderately wooded area, to its left is a kind of valley that the railway goes along, eventually going into Box Tunnel. Box Tunnel is fairly famous, since it’s such a large underground route and also linked to the mysterious underground city in the area.
Anyway, as I was walking along, a man pulled up in a car a little ahead of me. The man got out of his car and then headed in my direction.
“Excuse me, you wouldn’t happen to know where the portal of Box Tunnel, is would you?” he asked.
“Portal? Do you mean the entrance?”
“Yes.”
“Oh, well, if you just walk down this road and look through the fence on the left you’ll be able to see it. But, there’s not really a good view of it from there. Where do you live?”
“Oh, miles and miles away!” he said.
“Oh, okay,” I said. “I was going to use a reference point that you’d only understand if you lived here. But, yes, just walk down this road and you’ll be able to see it through the fence. It’s not a great view, but it’s better than nothing!”
“Heh heh, don’t worry, I don’t think I’ll bother!”
“Fair enough,” I said, and I smiled at him. I thought he must have been joking; surely he’d not drive ‘miles and miles’ to see something and then change his mind based purely off some second hand information that tells him the view’s not that great? Surely he’d at least look for himself first, it’d only take five minutes!
So, I carried on walking and a few seconds later he drove past me, waving as he left. I guess that was his whole day then…