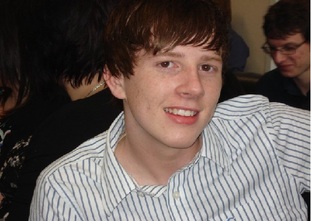 Ben Wood asked if I could write an entry about him, and now that I have a new laptop charger, I can do just that. That’s him in the picture above, and, for some reason, I always think that he looks quite a lot like Justin Bieber in that picture…
Anywho, I’ll now say a few things about Ben. I met him a few years ago, but at that time he wasn’t just a normal person, his hair was pretty much bright orange (or strawberry blonde as he once called it) but he spent enough times with the normals for his hair to change colour. I mentioned before, in my entry about Dalfino Madrigal Keyte, that Dalfino had been in quite a lot of crazy situations, but Ben has been in just as many himself. Off the top of my head I can think of sticking a golf club inside himself (I won’t say which part of himself, I want this blog to be PG rated), sneaking into a shower room and secretly photographing another male taking a shower, wandering around with his trousers around his ankles after drinking a few too many beers and taking photos of himself in his underwear and uploading them on the internet (he said this was done to ‘mock’ the people who do it seriously, but everybody knows he did it seriously…).
But, as with my other two entries, now that those embarrassing stories are over, I will tell you his good qualities. He may not know how much alcohol is a sensible amount to drink, but he knows practically everything about television, film and video games (although I’m sure some would argue this isn’t very amazing). He also is pretty skilled at losing weight; he used to be slightly fat, but then he lost loads of weight, but of course, we’ll still call him fat, people always need a fat person to make fun of, even if he’s only fat at heart. So that’s Ben Wood, perhaps a little crazy, but with a good sense of humour, and always having good intentions.

Just to add, as I always do, if you want a blog entry about yourself, just ask me in a comment or on my Facebook and I’ll do it 🙂