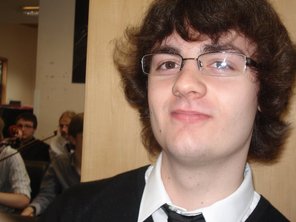 After Elliott Egan asked me to write an entry about him (and I did) it didn’t take long for Dalfino to request that I also write one about him. So today’s entry will be about Dalfino Madrigal Keyte.
Dalfino is quite unfortunate, in that, he often ends up in the strangest situations imaginable. For example, one day Dalfino received a text message, happily taking his phone out, believing that one of his friends had sent him a message, he opened the message… Only to find a random male had photographed the naked area between his legs and sent it to him…
Dalfino also has a rather crazy sense of humour; one day I was walking into town to buy lunch with him…
“So what shall we get for lunch Dalfino?” I asked.
“We could get cigarettes!” he replied, excitedly.
“Er… I don’t think that would be a good idea…”
“Or condoms!” he added.
Turns out that the reason for this bizarre outburst was that, as Dalfino had recently turned eighteen, he was excited that he was now able to buy such things (not that you need to be eighteen to buy condoms, if ever a country existed where the legal age of consent was two years younger than the legal age to buy condoms it must’ve been a crazy one). But Dalfino isn’t all madness…
One of Dalfino’s hobbies is to make music. Specifically, to write music for the guitar, and play it, and to write lyrics and sing them (he also does Radiohead covers). He even gave me an album he made called ‘Record of Matches’, one of the tracks was really terrible, but it wasotherwise a generally good album. He sticks to a kind of moody alternative style rock rather than going all poppy with his music.
So, anywho, that’s Dalfino. I think he may actually be the person I know in real life who has the most references in this blog (as of now) so I guess he should feel quite proud. I should also be quite thankful, as, if it weren’t for him, I never would have started writing a blog (which turned out to be pretty good).

Just to add, if anybody reading this would like me to write an entry about them, I’m happy to do so! Just tell me to do, and I will (eventually) 🙂