The Best Thing About the Super Smash Bros. Series 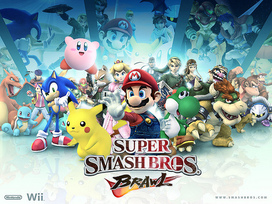 I enjoy the Super Smash Bros. series of video games for a number of reasons:
– The gameplay is very fun.
– It connects lots of things together (I love that kind of thing).
– There’s excellent multiplayer for two to four people.
– There are very many things to unlock.
– It’s full of nostalgic references.
But none of those things are what I love most about the series.
What I do love most about the series, and the main reason I would suggest others try it, is that it opens the doors to other games. Before I played Super Smash Bros. I had never heard of Fire Emblem, Kirby, Metal Gear or Metroid but, thanks to the inclusion of characters from those series, I’ve gone on to play several games from each one and to enjoy them very much.
I think we’re all a bit cautious about trying something new, especially with something as expensive as video games, but Super Smash Bros. rather ingeniously, eases you into these things. You may buy it simply because you’re a Mario fan, but then have a lot of fun playing as Link and decide you want to find out more about him, so you then buy one of The Legend of Zelda games. So, this is why I heartily recommend these games as it may well encourage you to buy and play games which you’ll love and which, otherwise, you may never have heard of or given a second look.

(I do not own the copyright of the image)