The Moon on a Lake

Posted on September 19, 2014 by Adam Randall
During my first year at university, every Thursday there was a plenary lecture which went from 5 p.m. to 7 p.m. and was given by guest authors each week. These were absolutely lovely, but it was at least a little inconvenient for me to get back to Corsham so late in the day, especially when I often had early classes on the Friday. As such, I had a nice little arrangement with my friend Tülin where I would sleep over at her house on those days.
So, on the day of each plenary, I’d arrive a little early, meet her at her house and then we’d go down into town and get the bus to the university. One day when I came, it just so happened that she hadn’t eaten yet, so she asked if we could go to McDonald’s before getting on the bus, and since she was providing me with a place to sleep for the night, I could hardly say no. So, we went to McDonald’s and she very kindly bought be a vegetarian burger along with her own dinner (and it was really rather tasty). That was all very nice but it did, however, make us a little late.
When we arrived at the university, the lecture had been going for about fifteen minutes and the prospect sneaking in in the middle was not an attractive one. We could just turn around and go home, but we did still want to see our friends who would be in the lecture, so we decided to have a walk instead and then afterward we’d just wait outside the lecture to speak to our friends when they came out.
I’m sure I’ve mentioned this before many times, but Bath Spa University’s Newton Park campus has an extremely nice surrounding countryside area, my favourite part being the ‘lake side walk’. When my friend and I walked down there, I’d been there several times before, but never in the middle of the night (as it was then). Up in the sky, there was a full moon and with winter now beginning to take hold, there was that wonderful crisp feeling in the air that comes around at the end of the year. The whole time, there was the peaceful sound of flowing water too.
As we came around the corner, we stopped and waited by a fence and looked down at the lake. The full moon and the stars were reflected on the water in the most beautiful way imaginable. I was very, very happy indeed, because by this point I was completely convinced that I would have an extremely good time at Bath Spa University. In the heart of winter, just my friend and I, I thought that the lake may indeed be the most beautiful thing I’d ever seen. I wasn’t much of a photographer, but I took out my phone and I just had to take a picture. 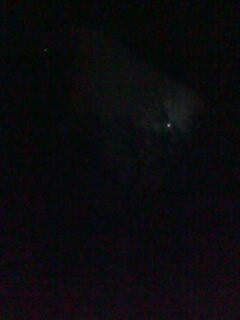 Sorry if I got your hopes up! It seems my phone’s camera wasn’t quite capable of capturing what I saw. But when I look at this picture, it helps me to remember what it was really like even more and I hope I never forget. It’s also nice to consider that, at the time, it would have seemed to be a ‘bad’ thing to miss the lecture, but in retrospect it was a very ‘good’ thing.