Posted on January 1, 2014 by Adam Randall
(I’m sorry this is so late! While it is quite a bit after midnight, this is Wednesday’s post. Today we are continuing the week of posts by people other than me. Today’s author is Rhino Water, a friend of mine who contributed a countdown before. Also, I should give a quick warning that this does contain some spoilers. Enjoy!)


Hello, this countdown is my top 10 best characters in games. First, two rules:
– Only one character per series.
– Only characters from games I’ve played.
So let’s get this awesome countdown started.

A Pokémon. It’s the best one out there. Its name is: Espeon. This Pokémon is the best one I’ve ever had. I remember first using it in Pokémon Colosseum and that’s when I found Espeon’s awesomeness. I loved it so much I used it in Pokémon XD too. Why? Just because I could. Whenever I see an Eevee I have to evolve it into Espeon. But Espeon only made it at number ten. Which nine characters got higher than this awesome Pokémon?

From the Star Fox series… Hmm who could it be? Fox? Falco? Krystal? Nope, they’re not even close. It is Wolf O’Donnell. This wolf is just awesome. I mean he is a wolf. A wolf. He is so awesome he was included in Super Smash Bros. Brawl. Wolf just played amazing in that. Sadly, I could not use him in Tabuu’s fight, but Wolf is still awesome. His line “play time’s over Star Fox” and his theme is just make him even more awesome. I know I am saying awesome too much but he is an awesome villain. One of the best villains I’ve had a chance to fight. He better be in the next Super Smash Bros.…

From Kingdom Hearts. Which character? Well, a Disney character, really. That loveable duck, Donald.
I mean, I grew up with Donald Duck and I loved him when he was in Kingdom Hearts. How could you not like him? He uses magic and without him some of the comedy in Kingdom Hearts will not be there because he’s the funniest character in it.

Okay, most of you will not have heard of this game but this character is from Bust a Move 4. It’s the villain Dreg. Dreg is awesome. Okay, sure he created a scary looking robot that’ll kiss anyone, but he has one of the best themes ever. He jumps really high when you win or if you are playing as him he jumps high if he loses and then a rock falls on his head. If it was not for him Bust a Move 4 would never have happened. He steals the rainbow bubbles so he can have power. MWHAHAHAHAHAHAHAHAHA. Then you have to stop him, but not right away you have to go through ten characters, then his scary kissing robot which he is inside of and then you can finally beat him once and for all. Dreg will not go down easily which means you have to listen to his awesome theme a lot. He drinks potions and then uses a flamethrower and then does an evil smile. Hehehehehehehe. Anyway, Dreg is one of the best villains I have ever seen.

From the Sonic series. Who is it? Shadow? No. While he may be awesome there is one character that is much better.  He is best friends with Sonic: Tails. What’s there to say about Tails? Well he is a fox that can fly and he has an awesome theme. He had to save Sonic’s life lots of times. Yes Tails’s voice may have been really bad in Sonic Heroes but it improved in the other games. Tails was the first Sonic character I ever saw and I’ve liked him ever since. Tails has been in almost every Sonic game there has been so that must mean that he’s awesome. How can anyone not like tails? He’s is such a loveable character.  There is probably nobody that hates him. Go Tails!

Someone who has had a sad life. Another wolf, but a good wolf this time. From Castlevania: Cornell.This character is awesome. Yes, I know he has a human form but I think of him as a wolf because his wolf form is best. He is from the children of the night, but he is good, although the humans hate him and think he’s evil. The others want him but Cornell says “I will never join you”. In Castlevania Judgment he has no friends and his sister is gone because of Dracula (yes, he’s very evil) and everyone thinks Cornell is evil because he’s stuck in wolf form.  Death and Carmilla both want him to join Dracula, but Cornell says “never” even if it means he could get his sister back. He will find her on his own. But let’s see how we use him in battle. Wow, awesome attacks. Awesome theme. Awesome final move. I mean, how can you not like him? Well, I guess you might not if you don’t like wolves. But still, he is the best. I know most of you will be saying the other Wolf is better, but I prefer Cornell.  His life makes me cry because I feel sorry for him. He should have had a much better life.  Cornell, you are awesome.

This next character looks like a pirate. Then when I saw he was riding a dragon, he looked like a sky pirate.  But no, he is from Fire Emblem. Haar. He is awesome. I always seem to overpower him and he is just awesome like that. He likes sleeping a lot and he uses an axe. Man, is he powerful. Never try and beat him because you will die. He doesn’t do much in the storyline, he only has a small role in part 2 of Radiant Dawn. He’s just a character you can use to beat the other team, so, yeah let’s use him to destroy them! MWHAHAHAHAHAAHAHAHA. I am making him look like a villain but no, he is a hero.  He is also one of the strongest characters in the game, I mean, just use him for one turn and you’ll see that he’s awesome. He only just missed out the top three. Wait, there are characters better than him? How can this be?

Okay, the next three characters have always been close to me. At number three we have that awesome bandicoot, Crash Bandicoot. He was a huge part of my childhood.  His first three games were awesome. Crash  Twinsanity, awesome. Sadly, the games are not as good now, but I still love the characters, like Ripper Roo, Dr. Cortex, Tiny (before he looked weird) and Uka Uka (when he looks like a mask) but Crash beats them all. How did he? By being  himself. He’s always happy and always funny. Crash Bandicoot is really awesome. Are there any other bandicoots like him?  There’s Coco but Crash is more awesome. He spins, he slides, he jumps, he smashes, he does what he does best: being himself and beating Dr. Cortex (or helping him to beat the evil twins).

Speaking of happy characters, here we have a Mario character who is green and happy all the time and that it’s a lot of things.Yes, Yoshi. He was so awesome they gave him his own series. Yoshi’s Island: beating Baby Bowser (yeah, Yoshi can take him down) with a screaming baby on his back, awesome. Yoshi can also drive a car, play in the olympics and go to Mario Parties. He’s also in the best crossover ever, Super Smash Bros. Brawl. In that game he has one of the best Final Smashes ever. Yeah, fire. Fire! MWHAHAHAHAAHAHAHA. Now I am making Yoshi look like an evil villain.Oh well, how can something so happy be evil? Well, maybe The Joker. But Yoshi is so loveable, just like Tails nobody could hate him. I mean, he’s much better than that mushroom Toad and much more helpful. He’s the best Mario character ever. Only one character is better than him,.. 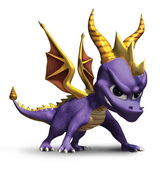 This next character is the first gaming character I ever saw. The first game I played was the first game he was in. He is a dragon and also the biggest part of my childhood. Number 1 is Spyro the Dragon. Spyro is the best character ever and I grew up with him. The first game I played was Spyro the Dragon and I have to say it was awesome. It made me who I am today. I could talk about Spyro a lot but we’d be here all day so I will keep it short. Spyro is a dragon who can breath fire and roar, but like Crash Bandicoot his games have been going downhill. Oh, no, not Skylanders, nooooo! Me sad. Me very, very sad. Anyway, back to the first Spyro game: the music was awesome, the dragons tell Spyro what to do… Ah, those were the days when Spyro was awesome. Spyro you are the besto. He always has friends to back him up too, like Sprax the dragonfly. He doesn’t talk in the first two games and in the third he just says buzz buzz buzz, but he is still awesome. Anyway, Spyro is the best character ever. No other character will ever beat him.