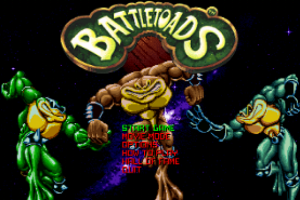 After successful games on the NES, SNES, Game Boy and where ever else, the Battletoads series was given a little bit of a finale with Battletoads Arcade. Gameplay is roughly similar to the earlier games, but it tries harder to be bigger and better than them.

The different levels often present different kinds of gameplay (for example, one time you’re flying with jetpacks, another you’re shooting enemies from within a vehicle) but generally it’s just fighting and it feels like there’s less variation than in previous games. This, for me, made the game occasionally feel a little boring. On the other hand, three-person co-op is always an option, which is nice.

One thing I have to say about this game is that if you ever try to play it in an arcade, you’re going to have to spend a fortune if you want to get to the end. The game was intentionally designed to kill you constantly, because there are bullets and enemies flying everywhere. This isn’t really a problem when playing an emulation like in Rare Replay because you’re given infinite continues, but I’m very sorry for your loss if you want to play “authentically.”

Overall, this is a fun game and I couldn’t help but smile at the ridiculously over the top violence and action. Occasionally things like bosses might begin to feel a bit tedious when they kill you constantly and the game does rather feel a bit short, but it’s still a good experience. Rating: 7/10