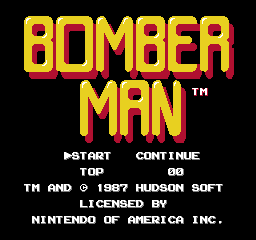 Though he has definitely fallen somewhat into obscurity, as I was growing up, I always thought of Bomberman as one of the icons of gaming. He was loveable and the gameplay of his games was simple and enjoyable. This was the game that started off his video game career.

Even in this very first game, you’ve got the classic Bomberman formula pretty much exactly as it would remain. You walk around in mazes full of enemies and drop bombs which explode in four directions. You have to plant them carefully so that you won’t get caught in the path of the explosion, but your enemies will. Along the way, there’ll be several destructible blocks and blowing them up can sometimes reveal power ups – these include additional bombs, increases to the size of the explosions, increased mobility and more. Once you beat all of the enemies, you have to find the exit (under a block) and leave.

It’s pretty fun. Catching the particularly speedy enemies can be very rewarding and you’ll find that you have to use different strategies for different types of enemy. It’s one of those games that actually gets easier as you progress, because the more power ups you have, the easier the game is, no matter how many powerful enemies you’re facing. Every time you die, you lose all your power ups, so you’ll find yourself being extra careful as you go on, because death carries great significance!

However, while the general concept behind this game is very good, it does have its shortcomings. Every level, for example, looks exactly the same and every level uses the exact same piece of music. Yes, it’s a nice little piece of music, but it starts to get repetitive after fifty levels! Another thing worth mentioning is that the Bomberman series is well known for it’s multiplayer, but this first game is an entirely single player experience.

Overall, it’s a nice game and quite fun. I was also very fond of its bizarre ending. But I do have to say, that it’s very simple and doesn’t offer very much in the way of variety.